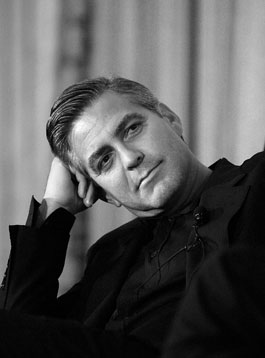 George Clooney likes the story of a television figure who uses his celebrity to make a positive impact on American culture. It isn’t hard to see why. Son of the longtime news anchor Nick Clooney, the former ER heartthrob grew up believing in the power of TV to make a difference. Now, at age 44, he has directed his second big-screen work on the subject.

Where Clooney’s underrated Confessions of a Dangerous Mind picked the febrile brain of The Gong Show host Chuck Barris, his new Good Night, and Good Luck salutes TV-news pioneer Edward R. Murrow, whose on-air battles with Red-baiting Senator Joseph McCarthy helped make the country safe for free speech—at least temporarily. (Also see a review of The Edward R. Murrow Collection.) Albeit set in the ’50s, Good Night is hardly yesterday’s news: The movie completed production not long before the New York Times broke the story that the Corporation for Public Broadcasting had hired a researcher to investigate the “political leanings” (read: liberal bias) of commentators such as PBS’s own Bill Moyers.

Clooney’s uncanny timing extends to his telephoning Mother Jones just two days before the death of anchorman Peter Jennings—a news event that would compel Big Media to wonder aloud whether Murrow’s legacy had died, too.

Mother Jones: Let’s start with the devil’s advocate question: At a time when the world is on fire, why make a black-and-white period piece about a TV journalist who did his greatest work some 50 years ago?

George Clooney: We’re in an awkward period in this country where, as an actor or a storyteller, you’re not really allowed to take on contemporary issues anymore because they’ve found a way to marginalize you if you do. So the trick was to keep the issues in a historical context. The more footage of McCarthy and Murrow we pulled, the more we realized how prescient this material appears—not just in terms of the government, but the Fourth Estate, too. In 1958, Murrow was talking about how television is a wasteland, how we’re all fat and wealthy and terrified of addressing the things that disturb us. He actually advised taking an hour away from The Ed Sullivan Show and devoting it to a thoroughgoing study of problems in the Middle East. In 1958! That shows you how American history is cyclical.

MJ: You see the current era as a reprise, then?

GC: It’s similar. I don’t find that the government today is quite as intrusive as it was in 1953—although the new Patriot Act is a bit of a concern. [Laughs.] When an FBI agent can get information from your doctor, without a subpoena, that your doctor isn’t even allowed to give you, that’s worrisome.

MJ: Fear is the common denominator in these two periods, right?

GC: Right—and how fear and paranoia breed the ability to attack civil liberties. The rationale is that to preserve the union, it’s safer if we take these Guantanamo Bay kids and rescind their right to a speedy trial. It’s safer not to call them “prisoners of war” because then we don’t have to follow the Geneva Convention. You look at it and you go, “Wait a minute—what union are we protecting?” In the McCarthy era, there was fear of the bomb going off, fear of your neighbor being a communist, fear of being labeled a communist yourself and losing your job. When you listen to Murrow saying that McCarthy didn’t create this climate of fear, that he just exploited it rather successfully, you go, “Oh, wow.” I tell you, if any candidate in 2004 had given one of these speeches that Murrow gave on his show, he’d be president today. You hear Murrow say, “Remember that we are not descended from fearful men,” and you just go, “Goddammit, where is that guy?”

MJ: How did he come to take on McCarthy?

GC: Murrow didn’t necessarily want to go to war with McCarthy. But after his show about Milo Radulovich—the kid who got kicked out of the Air Force because his sister and father might have gone to some Communist Party meetings—a guy who worked for both Hoover and McCarthy gave a reporter information that he said would prove Murrow had worked for the IWW, that he was a communist sympathizer since 1934. The minute that happened, Murrow knew he had to hit McCarthy before McCarthy hit him. So he went after him head-on, using his own words—which was a brilliant strategy, because how are you going to rebut your own words?

MJ: A good strategy, but he made it artful, too, wouldn’t you say?

GC: It was a stunning show, made beautiful by the end speech, where Murrow says, “We must not confuse dissent with disloyalty; we must remember always that accusation is not proof, and that conviction de- pends upon evidence and due process of law.” It’s an astonishing moment. But the funny thing is, that’s not what brought McCarthy down—it was his rebuttal, in which he spent half an hour trying to prove Murrow was a communist. Everyone knew that wasn’t true, because they had listened to him on the radio reporting the bombing of London and they knew he was a hero.

MJ: I imagine you must have read the books that argue that Murrow is overrated, that he’s highly flawed as a reporter, and so on.

GC: Sure. We put some of those arguments in the film. We had [the character of CBS chairman William] Paley take up some of those fights—like the idea that Murrow introduced editorializing to television, that he opened the door for Fox News. Murrow was cranky and he drank too much and he obviously smoked too much. But there isn’t one misstep that he makes at any point in that whole McCarthy period. Murrow understood that if he didn’t play it exactly right, the country was going to be saddled with McCarthy for another 10 years. Murrow became tough to be around. He was uncompromising. But in a way, we need that every once in a while. I miss that.

MJ: Your view of American history as cyclical assumes that if we were to look into the future, we’d see that the tide is going to turn. What do you think it’s going to take?

GC: Well, at some point it’s going to require a public outcry—which you can already see happening. For a while, everyone was afraid to ask questions because it was too soon after 9/11 and they would be called “unpatriotic.” White House reporters were afraid of getting pushed to the back during one of the president’s very rare press conferences. Now they’re laying into him more. They’re going after the Karl Rove thing pretty hard. They’re not going to get much—perhaps a cover-up charge. But the point is, you’re starting to see an element that’s saying, “Where’s the evidence? Where’s the proof? You can’t just dismiss us.”

MJ: Have the movies played a strong enough role in that tug-of-war?

GC: They haven’t. But I’ll tell you who really doesn’t speak out often enough: musicians. In the ’60s, when I was growing up, one of the great elements of American culture was the protest song. There were songs about the civil rights movement, the women’s rights movement, the antiwar movement. It wasn’t just Bob Dylan, it was everybody at the time. Now you can find only two or three bands that’ll do that. I think it’s just part of the corporate world: The more big corporations own music and movie companies, it becomes harder for artists. But you know what? We’ve got Syriana [based on the book See No Evil: The True Story of a Ground Soldier in the CIA’s War on Terrorism] coming out and that’s a balls-out film. We got Three Kings made. It can happen. It just takes stick-to-it-ness.