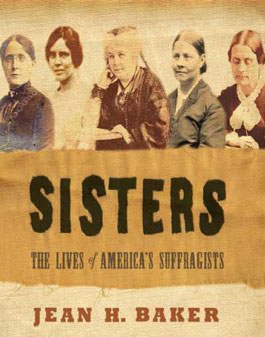 After traveling to Colorado in 1877 and observing yet another statewide defeat of a women’s suffrage amendment, fifty-nine-year old Elizabeth Cady Stanton wrote to a friend: “I am so tired in body and soul it seems as though I shall never feel fresh again…[it is] the tired[ness] of a whole life.”

Reading Jean H. Baker’s Sisters: The Lives of America’s Suffragists, makes the reader wonder how any of the five profiled women, working independently and together from the mid-1840s to 1920, managed to go on from year to year. Concentrated in an area that ranged from Illinois to Massachusetts, they traveled endlessly throughout the country and sometimes the world, scheming, writing, convening, publishing, lecturing, lobbying, enduring abuse, and—in some cases—caring for families. Yet of the five—Lucy Stone, Susan B. Anthony, Cady Stanton, Frances Willard, and Alice Paul—all but Willard lived to be very old during a period when longevity was rare. During their respective lifetimes, they not only won suffrage for women, but also brought about improvements in the areas of domestic abuse, women’s property rights, child marriage, divorce, equal pay, and the right of women to determine the size of their families.

In the introduction, Baker says that she wrote Sisters because the suffragists still remain relatively invisible in American history, and revealing their personal lives would bring them into focus as real people, rather than “conflate them into one middle-class overweight white woman with a severe look, hair unflatteringly pulled behind her ears, dressed in a high-necked black dress with a lace collar and cameo pin for decoration.”

The author does not disappoint. Though many feminists are doubtless aware of the lifelong friendship between Anthony and Cady Stanton, the nuances of that friendship may not be well known, and the personal eccentricities and struggles of the five profiled women are certainly not common knowledge. “Baldly stated,” Baker says, “public women must be denied private lives.” In Sisters, the suffragists’ private lives are richly drawn, enabling the reader to better understand what led them to devote themselves to feminist activism, and how that activism, in turn, affected their personal ambitions and struggles.

We meet, for example, a determined Lucy Stone, who, at the age of sixty-two, having fought for the right to vote in local elections, gave up that right in an election in Massachusetts because the commissioners illegally insisted she use the name of her husband. Stone was more conservative than her suffragist sisters, who repudiated the idea of giving black males the vote while excluding women. Though Stone shared their views, she was willing to wait for the nation to come around. She was also troubled that issues of divorce and the right to control childbearing (though she insisted on such herself) were part of the prevailing feminist agenda, and feared that these sexual issues would be associated with “free love.” Stone eventually broke from Anthony’s and Cady Stanton’s National American Women Suffragist Association and formed the American Woman Suffrage Association, bringing about the end of her decades-long friendship with Anthony. The two groups attracted thousands of members, and in 1890, merged to become the National American Woman Suffrage Association.

Anthony, for her part, never married, and held her marrying sisters in disdain, not only because caring for a husband and children took away time and energy she thought should be devoted to the suffrage movement, but because, according to the law, wives were quite explicitly the property of their husbands. Though Baker is careful to explain that 19th Century women—shut out from the world of men—frequently formed romantic (though not necessarily sexual) relationships with one another—it seems clear that Anthony was a lesbian, and enjoyed a series of very intense relationships with women.

Baker provides an intimate glimpse of the friendship between Anthony and Cady Stanton, a relationship that sustained the entire women’s movement for several decades. It also sustained Cady Stanton, whose husband, abolitionist Henry B. Stanton, was humiliated by Cady Stanton’s role as the leader of the American women’s movement, and who spent long periods of time away from his wife. The two women could not have been more different. Anthony lived an ascetic life, rarely indulging in any type of pleasure, whereas Cady Stanton raised a family of seven children, and enjoyed so much pleasure that she eventually became quite obese.

They also differed philosophically. Anthony believed that giving women the vote would help release them from oppression, but Cady Stanton, though she fought for suffrage, believed that liberation must precede suffrage. The two often argued, and the schism between them was never as great as it was when Cady Stanton wrote The Woman’s Bible as an attack on the Christian Bible. Nevertheless, between Cady Stanton’s thinking and writing, and Anthony’s organizing and speaking, they created a formidable team. Of her friend, Cady Stanton said, “I forged the thunderbolts and she fired them.”

Frances Willard, who as the head of Evanston Ladies College of Northwestern, was America’s first female college president, became famous as the president of the Woman’s Christian Temperance Union, founded in 1873 and still in existence. Willard was also a feminist, and campaigned for suffrage because of women’s lack of “home protection” from abusive men. Though her narrow concerns did not appeal to more radical feminists like Cady Stanton, she was nevertheless able to recruit three hundred thousand women to her cause, and her labor drew the admiration of Susan B. Anthony.

Willard’s personal life was especially interesting. She had the heartbreaking experience of falling love with a woman who instead chose to marry Willard’s brother. Willard later became deeply involved with another woman, and later, another, and spent the rest of her life living with both of them, making even this seemingly more conventional feminist a sexual iconoclast.

Finally, there is Alice Paul of New Jersey, author of the Equal Rights Amendment and founder of the National Woman’s Party, who—born in 1885—emerged as a leader after the other four had died. Baker’s task of revealing the suffragists’ personal lives becomes somewhat difficult in this case, for Paul apparently had no personal relationships of any kind, but was totally dedicated to scholarship and feminism. Inspired by the Pankhursts in England, Paul was thrown repeatedly into a fetid prison and brutally force-fed because she publicly defied President Woodrow Wilson’s refusal to support suffrage.
To make matters worse, she also actively exposed Wilson’s hypocrisy: He told the nation that he worked for a “new organization of society,” yet he turned his back on the suffrage movement. He told the suffragists that he had to follow the Democratic Party platform, yet he repeatedly reversed it when he wanted to. Paul and her followers stood outside the White House on several occasions and heckled the president, whom Paul nicknamed “Kaiser Wilson.” Paul was shunned by the NAWSA because of her public feud with Wilson, yet there is no doubt that, without her continuous protests, the Nineteenth Amendment would not have been ratified in 1920.

A theme that threads its way through all five profiles is the suffragists’ willingness to exploit racial bigotry as a means to get the vote for women. Though they fought to end slavery, they did not resist race-baiting to encourage the “protection” of women. Anthony and Cady Stanton campaigned side by side with notorious race-baiter George Train, and Stone, though repelled by Train, accepted her husband’s argument that giving women the vote would dilute the effects of black male suffrage and preserve white supremacy. The suffragists also felt angry and betrayed when supposedly sympathetic black abolitionists like Frederick Douglass and Wendell Phillips abandoned them once the Fourteenth and Fifteenth Amendments, guaranteeing equal protection and black male suffrage, were ratified. Even before the betrayal, Lucy Stone, in her typically frank manner, said: “I care less and less which triumphs—freedom or slavery. In either case all the women of the land are yet subjects ruled over by the white male population.”

Baker’s book does contain a flaw of obvious omission: Lucretia Mott is not one of the profiled suffragists. Mott, who with Stanton co-authored the famous “Declaration of Sentiments” at the 1848 Seneca Falls Convention, was a major influence on Stanton, and one of the most respected feminists of her time.

Sisters, however, is a gripping read, and Baker successfully weaves the suffragists’ colorful personal lives with their often harrowing political experiences. Contemporary feminists will recognize much of the content as all too familiar.