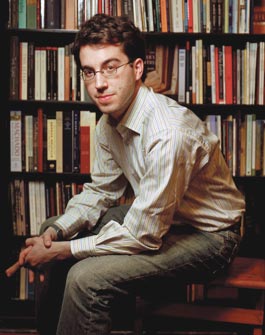 Until recently, Jonathan Safran Foer’s age got as much attention as his writing. He drafted his first novel, Everything Is Illuminated, as an undergrad and published it to fantastic acclaim in 2002. He still hasn’t shaken the wunderkind aura, but he has established himself as one of his generation’s most ambitiously versatile writers. Now 28, Foer earns seven-figure advances and has a film adaptation of Everything Is Illuminated (starring Elijah Wood as Foer’s alter ego) on the way. He released his second novel, Extremely Loud and Incredibly Close, in April. He hasn’t limited himself to writing fiction, either. His recent projects include installation art, an opera libretto, and coediting The Future Dictionary of America, a liberal lexicon whose proceeds support the Sierra Club, the League of Pissed Off Voters, and other groups.

Like his first book, which roamed playfully, and movingly, through the rubble of Eastern European shtetl Jewry, Extremely Loud explores the shadows of catastrophe. The book centers on Oskar Schell, a precocious nine-year-old New Yorker whose father was killed on September 11. “War is loud and close,” Foer says. “As for the novel itself, I hope the reader feels it loudly and close.” In a diner near his home in Brooklyn, he sat down for a quiet conversation about 9/11 as subject matter, his activism, and his sudden fame.

Mother Jones: Did you feel like you were taking a risk dealing with 9/11 in Extremely Loud?

JSF: Actually, I think it’s a greater risk not to write about it. If you’re in my position—a New Yorker who felt the event very deeply and a writer who wants to write about things he feels deeply about—I think it’s risky to avoid what’s right in front of you. None of the ways people were talking about September 11 felt right to me. I don’t buy into the way Bush talks about it. I don’t buy into the way the 9/11 commission talks about it. It isn’t that I don’t believe them. It’s just that they’re not the tellings for me.

MJ: Do you think readers will hold you to a higher standard because of the subject?

MJ: How did the idea for Oskar first come to you?

JSF: My test for writing is always, is this fun or does it feel like a job? Is it moving me? Or am I just fulfilling my own expectations—or even worse, somebody else’s? I was working on another story and I just started to feel the drag of it. And so, as a side project, I got interested in the voice of this kid. I thought maybe it could be a story; maybe it would be nothing. I found myself spending more and more time on it and wanting to work on that.

MJ: When you’re writing about a small child, do you develop protective feelings the way you would with a real child?

JSF: Definitely, and that was one of the things that was painful about the book. I knew I couldn’t give him what he wanted. I felt protective of him, but I was also creating the harms that befell him. It was a relationship that I felt deeply.

MJ: Both of your books have narrators who are, for lack of a better word, naive.

JSF: Yeah, they both have a sort of rawness. Their limitations define them. In the case of Alex in Everything Is Illuminated, it’s a linguistic limitation. In the case of Oskar, it’s limitation of experience. He hasn’t been in the world that much. In both cases, they look at things differently, and they help us do the same, which is one of the virtues of books. They can strip us of all the ways we’re jaded, or numb to things.

MJ: Your books also involve young people on a search, each with a totem—in Oskar’s case, a key from his father.

JSF: I didn’t intend to write about totems or people searching. I tried not to constrain myself, and this is what I ended up with. There’s this great Auden quote: “I look at what I write so I can see what I think.”

MJ: Have you thought about the ways Jewish influences have deepened your work?

JSF: I’m definitely secular. But I’m deeply curious about Jewish things. I’ve toyed around with the idea of going to rabbinical school. When I think about the kind of things I would want to learn, that ranks pretty high up there. Not in terms of learning about the dietary laws or when you can read a paper or not, but learning great stories. I want to talk about God in a literary way. But I think I would have a very hard time praying to God.

MJ: What’s your writing process like? Do you ever get stuck?

JSF: I usually write away from home, in coffee shops, on trains, on planes, in friends’ houses. I like places where there’s stuff going on that you can lift your eyes, see something interesting, overhear a conversation. There are still many different ways to get stuck, existentially stuck. Feeling like, “This is worthless. I’m wasting my time, and I would be wasting the time of someone who tried to read this.” It happens all the time.

MJ: Having worked on the Future Dictionary, don’t you find it ironic that there are so many talented communicators on the left, but politicians on the left have a terrible time expressing themselves?

JSF: Well, I think they’re good at expressing what they think; it’s just that liberals are inherently more nuanced and inherently more questioning. There’s nothing good about being certain about things. And I don’t think there’s any real talent in using language in a manipulative way, with phrases like “tax relief” or “Social Security reform.” It’s politically clever, but it’s also completely disingenuous, and it’s not something to aspire to.

MJ: What’s the best and worst part about having a best-seller in your early 20s?

JSF: The best thing is that I have complete control over my time. I used to have a million jobs and was rushing from one gig to the next. I don’t know if there is a worst thing. But in 10 years, people may wonder, “Jonathan who?” The books could be completely worthless, and things we don’t even read now could be considered the most important books. It’s not worth getting too excited about thinking about the larger picture. The larger picture doesn’t come into focus for an awfully long time.