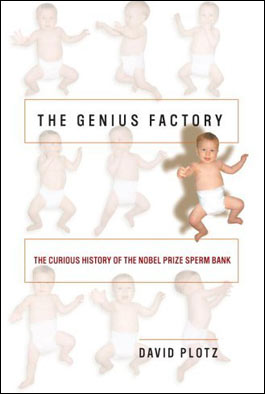 Imagine a utopia or a dystopia where embryos are genetically rigged to be born with choice enhancements: the budding flautist with 14 fingers, the scholar with prodigious memory, the painter with synesthesia. This, we say, is the stuff of science fiction, but, as David Plotz illustrates in The Genius Factory, controlling chromosomes in an effort to influence evolution is neither particularly new nor especially high-tech.

Plotz, a writer and editor for Slate, stumbled upon the story of the Nobel Prize Sperm Bank, but he became enthralled with the strange tale and tells it here with both humor and insight. The sperm bank was started in 1980 with “the immodest goal of changing mankind and reversing evolution.” Its progenitor, Robert Graham, was a 74-year-old optometrist and reclusive millionaire who coveted brilliance in part because he knew he lacked it. He did have a singular ambition: to track down all the Nobel laureates he could, ask them to jack off in a cup, and then attempt to sow the seed amongst women who wanted babies with high IQs.

The sperm bank closed in 1999, its records vanished, its archives sealed. But the very sketchiness of its history, combined with the hubris of its mission, riveted Plotz, who set out to track down the 200 or so of the sperm bank’s babies with these core questions in mind: Are these kids part of a new elite? Are they, in fact, geniuses? And who are the men who wanted to populate the world with their nameless silver seed? Plotz travels the country, using a combination of ingenuity and pure patience to find the Nobel boys and girls, to find their mothers and especially their fathers, to break bread with them, drink beer with them, to interview them and hang with them and capture the complexity inherent in any eugenics experiment. Plotz’s book is, at once, a mystery and a meditation: It seeks to unravel the age-old question of IQ and the degree to which it is heritable.

Central to the idea of hereditability, but rarely discussed, is the notion that intelligence—or empathy or courage or cruelty—can be, at least according to some theories, pinpointed to a particular place in a person’s body or brain. This idea was, perhaps, best manifested when, in the early 19th century, German physiologist Franz Joseph Gall founded phrenology. If you want to understand someone, Gall claimed, you need only palpate his scalp. The various inherited lumps and bumps supposedly corresponded to personality traits: intelligence, kindness, humor, love of music or of producing children, the latter called philoprogenitiveness. Phrenology never made it past the 19th century, but many of its assumptions remain intact.

In the 20th century we dropped the lump-’n’-bump motif and moved from skull topography to brain weight. The bigger the brain, the smarter its host. The Soviets set up an entire institute after Lenin’s death so that scientists could probe the brilliance of his gray matter. Einstein’s brain was found to be somewhat on the small side, at 1,230 grams.

We’ve since become more sophisticated. In the quest to locate intelligence, we have now learned how to extract little shreds of DNA and illuminate its spiral staircases. Such endeavors have given rise to seemingly super-duper futuristic questions, like can we breed a Mozart, a Virginia Woolf, a Caravaggio, a Picasso? Such grand visions and Faustian fears obscure the fact that in some ways we are already midway down this slippery slope. Infertile couples flip through thick binders, looking for their blond-haired, blue-eyed egg donor, the one with the heart-shaped face and the Harvard degree. The new documentary Frozen Angels (First Hand Films) reports that the United States has 500,000 sperm samples on ice and is exporting its fair-skinned sperm abroad. More than half of fetuses discovered to have Down’s syndrome are aborted. The advances in medicine that allow us to screen (and reject) fetuses and embryos for genetic diseases provide an inevitable opening to scan for other things as well: height, weight, ability. And all the while, the very speed and sophistication of these developments shield us from the fact that we are still, in some senses, 19th-century phrenologists. We don’t examine DNA for lumps and bumps, but we do analyze it for its secret mechanisms, its embedded recipes, which supposedly determine who we will become.

The Genius Factory is distinctive in the way it reveals the aspirations of an entire culture and the zaniness of its particular narrator at the same time. Plotz is as driven as a spermatozoa, thrashing his way across the country in search of people almost impossible to reach and questions too deep to decipher. Using Slate as his message board, he orchestrates audacious reunions between fathers and children, acting less like a journalist and more like a high-stakes party planner, but who can blame him? His book is one hell of a bash. His invitees are the brilliant men who, years ago, agreed to store their output in a vat of liquid nitrogen, the women who sought insemination with such seed, and the results, named Alton and Tom and Victoria and Joy, their abilities, their proclivities, their failures and successes. Says one of the sperm-bank parents, “We feel we have a duty to raise this child for the betterment of society. We’ll give her the best educational opportunities possible. We’ll begin training Victoria on computers when she’s three, and we’ll teach her words and numbers before she can walk.”

Pshaw, we say. That’s too reductive. Human beings are the product of nature and nurture and profound forces not yet understood. However, a little piece of us wonders: Is it possible to locate and breed intelligence? They do it with dogs, don’t they? It is this question, played out again and again, that makes Plotz’s story of the Nobel babies so compulsively readable.

The kids, it turns out, are a mixed lot, cause and correlation impossible to untangle. Some are high achievers. Others are pot-smoking slouchers. Are these outcomes the result of “genius” sperm, or parents’ expectation of brilliance, or the constant pressure that a child might either buckle to or buck against? Either way, these kids are at once products of the oldest questions and the newest science; they illuminate the politically incorrect possibilities of selective breeding at the same time that they cast a serious cloud of doubt over whether it is possible.

The book is successful in its continuous state of amused suspension, between yes and no, here and there. One thing is made quite clear: We are a culture obsessed with genes, those tiny packets of potential protein, those supposed recipes for eye color, muscle mass, brilliance. While our genes may or may not determine us, our obsession with them defines us; we want to know where, how, why we came to be; we ask and answer the nature/nurture question over and over again, a kind of continuous masturbatory act, a Freudian repetition compulsion that says, “See. See. Here is the plan. Go ahead. You can touch the truth.”