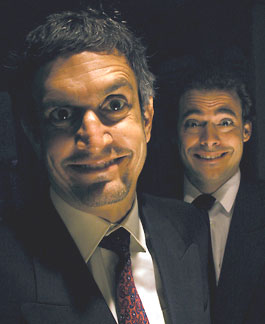 On December 3, Dow Chemical “spokesman” Jude Finisterra appeared on the BBC to make an astonishing announcement: His company, now parent to Union Carbide, would mark the 20th anniversary of the lethal gas leak in Bhopal, India, which killed 20,000 and injured 120,000, by paying out $12 billion to the survivors—”simply because it is the right thing to do.” Unbelievable? Sure it was. Within a few hours, Finisterra had been unmasked as an impostor, while the real Dow quickly reiterated that it wouldn’t give a single rupee to the people of Bhopal—cementing its reputation as a corporate grinch.

Chalk up another one for the Yes Men. Equipped with absurd aliases, cheap suits, and official-looking websites, Andy Bichlbaum (a.k.a. Finisterra) and his coconspirator, Mike Bonanno (above right), have posed as officials from the World Trade Organization, McDonald’s, and even the Bush campaign. Rather than being exposed as frauds, the Yes Men and their crackpot proposals—from recycling human waste into fast food to using global warming as a weapon against the French—are often met with approval from unsuspecting audiences.

The duo are currently hiding out in Old Europe, but their exploits have been captured in the documentary The Yes Men, now out on DVD. Mother Jones spoke to Bonanno, 36, and Bichlbaum, “36-ish,” shortly after their Bhopal prank.

Mother Jones: How did the Dow/Bhopal stunt come about?

Mike Bonanno: Andy had set up a site called Dowethics.com that made a bit of a splash in the U.S. media two years ago when it sent out a press release saying that Dow would never take responsibility for damages from the Bhopal gas disaster because they were only beholden to shareholders. It was a kind of honest approach that, of course, did not come from Dow, but from Dowethics.com—in other words, us. This time around, an email from the BBC arrived addressed to Dowethics.com that invited a spokesperson from Dow to come on the show. So we immediately wrote back saying we’d be happy to send somebody.

MJ: Were you surprised that a BBC reporter got sucked in by your fake site?

Andy Bichlbaum: It’s an issue of time. There are so many stations with so few journalists that they cannot possibly verify all of their sources. That’s how corporate press releases end up parading as news.

MJ: What measures do you take to convince people you’re legit?

Mike: We haven’t actually needed to take any precautions besides the shave and the thrift-store business suit. The ones that we were wearing when we went to the BBC cost £5. We did make some business cards this time around, and we have made identifications in the past, but have never actually needed them.

MJ: How do you get in character to go on TV as a Dow spokesman or a WTO rep?

Andy: I have a nervous breakdown for about four days—and then I’m ready. In a lot of these stunts we’ve both had the feeling that we could easily be attacked, or jailed, or even just unmasked. So that’s pretty nerve-racking, and yet very exciting.

MJ: How do you come up with your fake names? “Jude Finisterra,” for instance.

Andy: Jude, of course, is patron saint of lost causes, and Finisterra, etymologically, is the end of the world—which seems like about the time Dow would take an action against its bottom line.

MJ: Some people would say the Union Carbide disaster is no laughing matter.

Mike: I don’t think anything is off-limits. Usually the most desperate situations are the ones that call for the most desperate actions in response. The people of Bhopal have been trying for 20 years to get someone to listen. It was less about it being funny and more about being the only kind of action we could think of that would get into the media. Typically, we haven’t been in the business of suggesting alternatives. In the case of the Dow statement, Andy did suggest an alternative—paying out $12 billion in damages. That is exactly what Dow should do. Of course, everyone applauded and agreed with it—except Dow.

MJ: How did you become the Yes Men?

Mike: I founded the Barbie Liberation Organization. Just before Christmas of ’93, we bought a bunch of Teen Talk Barbie dolls and talking G.I. Joes, switched their voice boxes, and then snuck them back into stores. When people opened them on Christmas Day, they found Barbies saying things like, “Dead men tell no lies.” And coming out of the G.I. Joes were things like, “I love to shop with you!”—which was kind of shocking coming out of a G.I. Joe. It should have been just as shocking coming out of a Barbie.

Andy: I was a programmer, and I inserted these kissing boys into a video game; 80,000 copies got shipped to store shelves, and it became a big media brouhaha. It became obvious that this was an interesting way to get media attention for causes.

Mike: Back in 1999, we were working on a project called rtmark.com, which was a website where people could meet and work on anticorporate activist projects. Through one of the fake websites that Andy had set up—gatt.org—we got an invitation to attend a trade conference as the World Trade Organization. When that happened, we split off and formed the Yes Men.

MJ: Tell me about your work for the “Bush/Cheney” campaign.

Mike: Last summer we traveled around trying to represent the Bush campaign more honestly than they represent themselves. We asked people to sign the Patriot Pledge.

Andy: Part of the pledge was volunteering to pollute as much as you possibly could. We even got people to pledge their support of global warming as a weapon. You know, global warming might upset the global weather system so there will be a new ice age that will freeze over Europe, leaving America relatively intact. We went around saying that we should look at it as a bonus, and just pollute more and more.

MJ: How many signatures did you get?

Mike: A few hundred. It was devastatingly disappointing to have people sign it.

MJ: Do you worry that you’ll get overexposed and that will make it tougher to get access to conferences or the media?

Andy: We’d have to be as well known as Michael Moore. Even Ali G gets away with murder relative to what we do.

MJ: I’m wondering who is bankrolling you. Do they put in requests?

Andy: We got a Guggenheim grant. Not a bad way to use art money. And if anyone wants to give us a bunch of cash and make a request, great. But that’s never happened.

MJ: Are you guys takin’-it-to-the-streets kind of activists as well?

Andy: We go to protests whenever we can. We were at the Republican National Convention. We were in Genoa. What we do is useful, to one degree or another, but the best thing is to unite a million people in the streets and get them to call for something.

Mike: Look at the Ukraine.

Mike: Just go out and do it!