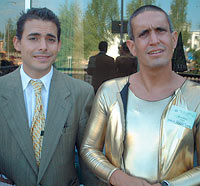 News flash: Radical activism can be fun! This gut-busting documentary follows the
antics of two political performance artists who set up a website parody of the
World Trade Organization in 1999. To their delight, the site has often been
mistaken for the genuine article and has earned the faux free traders invitations
from around the world to speak on behalf of the WTO. The Yes Men documents the
hilarious results.

The duo promote ever more ludicrous ideas—auctioning votes to the highest bidder,
for instance—and are shocked to find that their proposals are met not with
outrage but applause. The only group to recoil in horror are students at
Plattsburgh University, where the “WTO reps” propose solving world hunger by
routing “recycled” food from sewer pipes in the First World to fast food
restaurants in the Third World.

How do these jokers get away with it? As the Yes Men offer on their website,
“Anytime anyone [in power] has done something about us—saying they ‘deplore’ us,
complaining we’re a political action committee, whatever—they’ve looked ri-
diculous to the press.” We’ll see what happens after The Yes Men is released
nationwide in August.