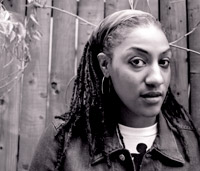 Sarah Jones is a 30-year-old writer and performer whose work slices into the heart of the American predicament. In her one-woman plays, she explores the anxiety that comes with America’s—and particularly New York’s—immigrant culture. Using only a jacket or a scarf as props, Jones creates a full cast of characters, altering herself from, say, a shy and scared Latina to a tart Australian princess to an elderly Russian Jew.

Jones got her start at East Village poetry slams, where one of her champion efforts was “Your Revolution”—a comeback to bitch-calling and money-loving hip-hop. The poem begins: “Your revolution will not happen between these thighs / The real revolution / Ain’t about booty size / The Versaces you buys….” But in May 2001, an Oregon radio station that played the poem was fined by the FCC for indecency. Jones sued and in 2003 forced the commission to withdraw the charge and rescind the fine.

Her latest show is the critical smash Bridge & Tunnel. The setting is a poetry reading in Queens, hosted by an affable Pakistani accountant named Mohammed and featuring a dozen equally vivid characters. Hilarious and deft, Bridge & Tunnel leaves an indelible impression; as Jones notes, “We are all much more connected than any of us realize.”

Mother Jones spoke to Jones about her mix of humor and politics, as well as the fight over indecency in the wake of Janet Jackson and Howard Stern.

Mother Jones: I wanted to ask you about Mohammed in Bridge & Tunnel. He describes himself as a “red-blooded, Allah-fearing Republican.” But we overhear him harried on his cell phone and know that he’s been summoned to an “interview” with some federal authority. Was it something he said?

Sarah Jones: Well, I think the whole idea is that we don’t know. He doesn’t know. And that’s exactly the point. He’s just been living his life as normal—going to work, taking care of himself and his family. He genuinely doesn’t know what he could have done wrong. To me, this is the painful irony of this moment: Going about your daily life is no longer acceptable. You think you’re being careful, but that’s not enough to protect you from the tentacles of the Patriot Act and all of the rest of it.

MJ: By virtue of suing the FCC, you’ve become an icon for free speech—

SJ: Suing the FCC was important because what they were doing with my song was representative of the larger abuses of power. It was clear that there was a political issue with my song. They never even told me what about the song was “indecent.” It’s a joke. This is an agency established to protect the public interest which instead has become the biggest champion of the consolidation of media in history. [FCC Chairman] Michael Powell spends his days deregulating the media and then takes a break to clamp down on artists that he thinks are naughty? As we saw with Nipplegate, he’s fashioned himself as a protector of these conservative views.

MJ: Are you a free-speech absolutist?

SJ: I understand the need for standards. And I don’t appreciate terms like “nigger.” There are those who would like to say it’s been reclaimed, but those same people didn’t get dragged behind a truck like James Byrd in Texas. We’re not in a place where we can start to frolic around with these words that carry so much meaning and pretend that they don’t.

I think you can’t be allowed to use the public airwaves to spread hate. I love hip-hop music and culture, but Eminem—while he may be a talented lyricist—I think it is dangerous to hear people talk about “killing bitches.” And I think when you turn on the radio and someone is saying, “Hey baby, if I had some chloroform you’d be mine tonight”—that’s pretty scary.

But if we’re going to hold some people to standards of what’s decent and what’s not decent, we have to hold everybody to standards. And if we’re gonna come up with standards, they certainly should not be established by someone like Michael Powell.

MJ: Your play is both intensely serious and very funny. Do you work at the humor to help the medicine go down?

SJ: Everybody I’ve ever marveled at—from Richard Pryor to Lily Tomlin—they manage that carefully calibrated balance. And it’s usually more humor than not, because that’s life. I’m thinking of people I met doing research in prison last summer. These folks have got the most harrowing tales—full of violence and horrible circumstances from the time they’re little—but can crack jokes and laugh with the best of them. A cop abused you, but you got one good line off—and it’s enough to keep you laughing through the first part of your sentence. It’s horrible, but this is reality for a lot of people.

MJ: Tell me about your research for Bridge & Tunnel. Your characters—from Lorraine Levine, a Jewish grandmother, to Juan José, a Mexican labor organizer—are fictional, but they read as true.

SJ: For this piece, I did formal interviews for the first time. It’s not easy for me—an American-born black person—to come up to people and say, “Hi. I want to dig into your bag of experiences and maybe even make you worry that I work for the INS.” So I used more formal channels in some instances. For Juan José, for example, I went on a run with the border patrol in San Diego.

MJ: I’d like to repeat a few lines from the play and get your opinion, not as the character, but as Sarah Jones: “It may not be perfect, but we live in the best country in the world.”

SJ: Some days I believe that. Some days, I’d like to move to England. I worry that our complacency will be our undoing. We’re a country of people who are full of good intentions but equally full of misinformation.

SJ: [Laughs.] That’s me taking a dig at myself and answering everybody I’ve ever heard say, “But it has to be art for its own sake.” I’ve never seen art for its own sake. Even Oklahoma!, as a piece of theater, is a statement that we don’t want to challenge the pleasantness of America: “We like the story just as it is. We don’t want to tell the story of the Trail of Tears.” That’s a political choice.

MJ: “This poem is not supposed to make you happy or comfortable / It won’t fold your shirts / But it may air your dirty laundry.”

SJ: That’s what I imagine a lot of people would say if they could get the time onstage, people who are tired of being cast in just one light, if they are visible at all. Every once in a while, you’ll have an interaction with someone and there’s an urgency about what they have to say. It might not be popular; they might not be a person with the sort of face you’d see on TV. But they’re going to make their voice heard. Those encounters have always resonated with me. I want to hear the stories that won’t fold my shirts. I want to hear the other side. I want to not be made so happy and so comfortable all the time.