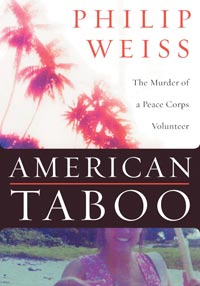 Philip Weiss’ investigative work is a “heart of darkness” tale of idealism and violent death in an exotic land. In late 1975, Deborah Gardner, a 23-year-old Peace Corps volunteer, arrived in Tonga—an island kingdom Weiss describes as “a period on the map of the Pacific Ocean.” Already on the islands was one Dennis Priven, a brilliant, troubled young math instructor. Gardner was gorgeous and lively, and soon a handful of Peace Corps volunteers were at least half in love with her—Priven among them. But when Gardner deflected his attentions, he began stalking her. Ten months after
her arrival, Weiss writes, Priven killed Gardner, stabbing her more than 20 times with a dive knife.

Priven was tried in Tonga, defended by a wily attorney—at Peace Corps expense—and found not guilty of murder by reason of
insanity. (Weiss’ re-creation of the trial is particularly gripping.) U.S. officials then maneuvered to bring Priven home, with promises that he’d be committed to a psychiatric hospital.

But back in Washington, D.C., Peace Corps officials declared his service completed and watched him walk out to catch a plane to New York, where he lives to this day. End of story. No explanation to the Tongans who’d worked diligently to conduct a fair trial or to the victim’s parents. The whole dishonorable episode was buried by our government.

Weiss, a journalist for the New York Observer, was haunted by this story for years, and in 1997, he began digging like a possessed archaeologist. What emerged is a riveting narrative and an unforgettable portrait of American volunteers and Tongan officials. For those who’ve been tormented by the incident, Weiss’ exhaustive work must now appear as a kind of catharsis. For most readers, the sorrowing lesson at the center of Weiss’ story is that when it came to pursuing justice and the rule of law, officials in remote, impoverished Tonga were more steadfast and honest than officials of the United States of America. There is a humbling and timely lesson here for all of us citizens of the last superpower.