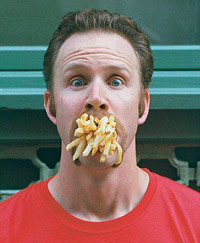 Ronald McDonald and Michael Moore would certainly agree that it doesn’t
hurt to look like a clown when you’re peddling your product to the masses. And so would Morgan
Spurlock, whose highly marketable Moore-style film documents his month long, all-McDonald’s
diet.

Morning, noon, and night, Spurlock chows down at the Golden Arches,
accepting “Supersizing” when offered. On day two of the adventure (“Every eight-year-old’s dream,”
he says), our hero spews his drive-thru lunch out the window of a minivan. Along the way, Spurlock
discovers a kinky hair in his McSundae; finds that, at least among first-graders, Ronald may be
more famous than Jesus; and struggles to land an interview with the CEO whose corporation’s caloric
cuisine causes him to gain 17 pounds in 12 days.

This is funny stuff—and deadly serious, too. Its message may
already have gotten through to corporate headquarters: In March, McDonald’s announced it is phasing
out Supersizing. But the real question is whether Spurlock’s little movie can reach the supersize
folks his camcorder captures largely from the shoulders down. No doubt, most of them lack the slumming
filmmaker’s close medical supervision, not to mention his awareness of de facto corporate food
poisoning. Spurlock, meanwhile, plays his blood tests and weight gain almost purely for laughs.
Ironic that a critic of the fast-food industry would pack his product with superfluity at the expense
of substance.