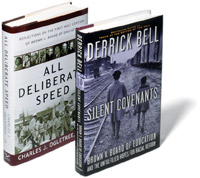 If Einstein is correct and “insanity” is doing the same experiment again
and again and expecting different results, then America is truly delusional in its approach to
education and racial integration. Fifty years after Brown v. Board, the landmark Supreme Court
decision that invalidated the doctrine of “separate but equal,” America’s schools are as segregated
as ever—with often abysmal educational and psychological outcomes for black children.
To stop the madness, both Ogletree and Bell argue that what America must stop doing again
and again is attempting to provide integrated education for its children.

The notion of retreating from integration is blasphemous, unthinkable,
inherently racist. Yet, it rings true, even as one sputters in protest at the heresy. Fifty years
of culture wars notwithstanding, integration is still more rhetoric than reality, and it is the
ever-neglected minority children who pay the price for our continued focus on this seemingly
unattainable goal. Perhaps it’s time America cried “Uncle.” Racism won.

Mournful books both, Bell’s best captures the significance of Brown
at the time of its pronouncement and of African Americans’ then-unconquerable optimism about
the country’s ultimate goodness. Mustered out after the Korean War, Bell was in law school in 1954;
Brown, he was convinced, “marked the beginning of the end of Jim Crow oppression in all its myriad
forms. For black Americans long burdened by our subordinate status, there was, to paraphrase the
spiritual, ‘a great day a-coming.'” He describes meeting with William H. Hastie, the first black
federal judge, shortly before Bell graduated in 1957. “Son,” Hastie told him, “I am afraid that
you were born 15 years too late to have a career in civil rights.”

Forty-seven years later, civil-rights advocates are still trying
to integrate America’s schools, wistfully invoking Brown like the abandoned child stationed
at the window waiting for parents who are never coming back for her. But not Ogletree and Bell;
two of the nation’s premier civil-rights scholars and attorneys, they’ve surrendered the dream
of integration and now demand that separate schools actually be made equal.

While Plessy-style segregation might have been psychologically harmful,
even more so has been the fruitless, enervating quest to force, trick, or cajole whites into sharing
their neighborhoods and classrooms. An elderly teacher from one of the Jim Crow era’s highest achieving
black schools—Dunbar in Washington, D.C.—remarks sadly, “Integration, with all
the good it brought, was also the beginning of the end of Dunbar and Negro education as I’d known it.
I wouldn’t want it to go out that I’m not for integration—I am. I’m not for what it did to Dunbar
and to students.” One woman adds, “We got what we fought for, but we lost what we had.” Even that was
too optimistic; except for the rhetorical victory of Brown, blacks did not get what they fought
for.

Whatever its promise, the reality of desegregation has been grim, as
a peek inside America’s still segregated and still substandard black classrooms quickly reveals.
White students, Bell notes, attend schools that are 80 percent white. Today’s residential and
educational segregation rates equal that of de jure Jim Crow to within two-tenths of a percent in
some neighborhoods, resulting in a “social and economic apartheid.”

Educational outcomes have been equally stark: On standardized reading-achievement
tests, black nine-year-olds have scored an average of 10 points lower than white ones, and black
students are still twice as likely to drop out of high school as whites. Functional illiteracy is
as high as 40 percent among minority youths.

“With fifty years of hindsight,” Ogletree writes, “the tragic lesson”
of Brown is that it “actually defined…the power of racism as a barrier to true racial progress.”
The Brown directive to proceed “with all deliberate speed,” rather than with specific goals and
timetables, he argues, opened the door to “massive resistance” at every level of society. “It began
from the day the decision was issued…through to the Boston busing crisis of 1975…and,
most telling, to the resegregation of our schools and our communities in the twenty-first century.”

Somewhat ruefully, these two legal stars, both of whom committed substantial
portions of their careers to Brown-style advocacy, admit that the black community
was ambivalent about integration. “Too often, integration is presented as an unalloyed benefit
for African-Americans,” notes Ogletree:

For many in the African-American community, however, integration was viewed with
suspicion or something worse. Many communities at the center of the battle…would
have welcomed something less than the full integration demanded by the civil rights lawyers.
These teachers, school principals, and janitors would rather have kept their schools, their jobs,
and their positions of power and influence than see their charges bused to white schools run by white
principals where white educators often made the children all too grimly aware of their distaste
for the new state of affairs.

Indeed, the NAACP was known to oust local leaders who opposed integration
and to file court briefs attacking the plans of blacks who fought to improve, rather than integrate,
black schools. These two books apologize for that—for an elite forcing its vision on a wiser,
more practical community. They function as eulogies for the dying dreams of integration, for years
spent in fruitless jousts with white intransigence, for two generations of black children used
as pawns and tossed aside, uneducated. And they offer a hero’s funeral for Brown with a promise to
keep fresh flowers on its grave, that resting place for what might have been.

Whites will argue that it is not racism that causes white flight and dismal
minority educational outcomes. But Eisenhower, president during Brown, was unguarded enough
to tell the truth: “[Southern whites] are not bad people. All they are concerned about is to see that
their sweet little girls are not required to sit in school alongside some big overgrown Negroes.”
Fifty years later, that determination remains. So be it, because Eisenhower was also correct in
noting that “it is difficult through law and through force to change a man’s heart.” Impossible,
perhaps—or so advocates for minority education should believe.

Regardless, 50 years is a long enough experiment, and it’s time we accepted
the obvious, as did W.E.B. DuBois in 1935: “Negro children needed neither segregated schools nor
mixed schools. What they need is education.” Insane as it seems, perhaps embracing segregation—ensuring
that separate truly is equal—will make all the difference.