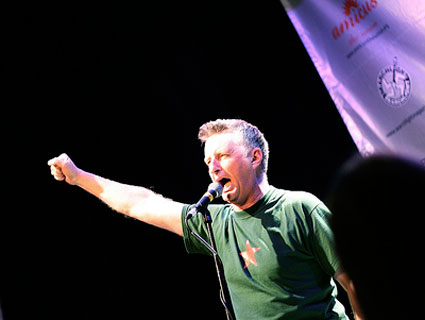 Billy Bragg has seen many things since he was first inspired by The Clash: a brief period as a soldier (he’d fancied driving tanks); years on the road as a one-man conscience of a nation (the “Coal Not Dole” movement in support of striking miners; protests against American missiles in Britain; his presence at nearly every progressive gig, festival, or march); a quick sojourn as a pop star (No. 1 on the U.K. charts with a 1988 cover of The Beatles’ “She’s Leaving Home”—for charity, naturally); and a year or so as the inheritor of the spirit of Woody Guthrie (collaborating with Wilco to set Guthrie’s spare lyrics to music on the Mermaid Avenue albums).

Now, 20 years after his first album, Bragg has released a retrospective: Must I Paint You a Picture? He also recently toured in the United States along with Steve Earle and Tom Morello on the “Tell Us the Truth Tour”—an attempt to counter the misinformation propagated by the Bush administration through an insufficiently critical media. But when Mother Jones calls the 46-year-old Bragg at his house in the rural southwest of England, with its sweeping view of the English Channel, the thing that is uppermost in his mind is walking the dogs before it gets dark. It’s what every ex-punk should aspire to.

Mother Jones: Last time we spoke was about 20 years ago, outside the QM Union in Glasgow, waiting for the all clear after a bomb scare. We had Thatcher, Reagan, bombs—you wouldn’t have thought it would have gotten worse.

Billy Bragg: No, you wouldn’t. And with a British Labour government at that. I think part of the problem is that the American administration wants to turn the clock back—certainly to the Cold War. “These guys are bad. We’re good. You’re either with us or against us.” The world isn’t like that anymore, but they can’t deal with that.

MJ: Back then you became a central figure for the opposition. Why don’t we see musicians like that today?

BB: There are still people willing to put their heads above the parapets, but I don’t think music is as energized as it was in the 1980s, when we’d come off the cultural revolution that was punk rock and were still within living memory of the radicalism of the 1960s. That’s one of the things the “Tell Us the Truth Tour” was about, trying to make sure a diversity of voices is heard instead of just the voice of the administration.

MJ: What was the inspiration for the tour?

BB: Most of us had in mind the fact that the majority of American people believed Saddam Hussein was behind September 11. That in itself would be troubling enough if it hadn’t been used by the administration to justify bombing Iraq. And now as a direct result of that misinformation, young American servicemen are coming home in body bags.

MJ: As an Englishman, is it your place to meddle in American politics?

BB: As a citizen of the only other country that’s gone into Iraq gung ho, I do think that gives me a right to make my comments towards the American people. I’m very focused on the fact that the problem I have is with the administration. I’ve never been into this anti-Americanism; the problem is with this government. The majority of Americans didn’t vote for this guy. They voted for somebody else.

MJ: Can three singers really counter the disinformation of the Bush regime?

BB: It’s not just three singers. When you pull into town, you have to act as a focus for people who are going to be staying around long after we’ve gone—they are the people who are going to make a difference. My bottom line has always been about getting people to engage and not just sit there being cynical. Whether or not we actually change anything is ever so hard to judge, but it’s still worth having a go.

BB: It’s as if we are holding their horse while they go into the saloon to sort everything out. Listen, I’m all in favor of catching the people who made September 11 possible. I want them brought to justice so it never happens again, not in America, not in Iraq, not in Israel, not in Palestine. But I believe invading Iraq made the world more dangerous. This is an argument that is hard for people who live in America to make because they fear being called a traitor. So it behooves us to make common cause with our American cousins who have the same sense of ambiguity about the way the world has gone.

MJ: The Bush administration wasn’t the only target of the “Tell Us the Truth Tour.” You also took aim at the mass media.

BB: You’ve got to point out that the monopolization of media outlets is not good for society. I was able to come through on the back of a diverse media, and I’m concerned that the next generation won’t be able to benefit from that, because everything will be reduced to the lowest common denominator, which is American Idol. And obviously, never having been pretty, I’m very much concerned by that. I’m worried that we will end up with just one record label, one radio station. I went to a place like that once; it was called the Soviet Union. I think it’s horribly ironic that American capitalism, looking at the way the big record companies are going, the way radio stations are going, is moving to that exact same monopolistic position.

MJ: Do you think this is the time to make politics more oppositional?

BB: It’s not a time for writing love songs, I’ll tell you that. You’d think it would be a nonpartisan issue—the agenda that we all want—to make the world safe from the perpetrators of September 11, by finding those people and bringing them to trial so that what they did can be exposed as a horrific crime of mass murder. But the neoconservative agenda has very quickly taken over.

MJ: You say, “It’s not a time for writing love songs,” but I was surprised listening to Must I Paint You a Picture? that there were so many love songs written at the start of your career—at the height of the Cold War.

BB: I am a writer of songs, and a lot of them are love songs and a few of them are political. But because so few people write political songs, I find myself being interviewed by Mother Jones. I don’t mind being called a political singer/songwriter, but I really object to being dismissed as a political singer/songwriter. I write about the way the world is. Politics isn’t everything. Sometimes it does feel like it, but that’s when you’ve got to look out the window, take the dog for a walk.

MJ: But not just anybody can write “Help Save the Youth of America”—

BB: Now there’s a song I’ve got to dust off!

MJ: We are 25 years on from the heyday of punk-driven songwriters such as yourself, Joe Strummer, and Elvis Costello. How do you think your evolution has gone?

BB: Someone was having a go at me the other day for writing about Englishness, on my album England, Half English, when I used to write about “big issues.” I’m writing about it because xenophobia and nationalism are dangers now in the vacuum left by the decline of the Soviet Union. That nationalism, particularly English nationalism, can be a nasty thing. My first ever political act was to go on a Rock Against Racism march to see The Clash. And to me, writing England, Half English was a continuum of the same subject. I don’t think I’ve changed hugely. I sold my London house so I could move to the country, but that doesn’t mean I sold my principles. I’ve managed to keep hold of those, and I think it was the same for Joe, God rest his soul, and with Elvis.

MJ: Do you consider yourself a success?

BB: I think success is doing what you always wanted to do and getting paid for it. I’ve been doing this for 20 years; I feel very successful. I’ll never get inducted into the Rock and Roll Hall of Fame—that doesn’t bother me. My job is to sniff the smoke and tell people where I think the fire is.

MJ: So when you look in the mirror, you see a Clash-inspired songwriter rather than a middle-aged family man?

BB: I am a middle-aged family man, too, but that doesn’t preclude you from having the fury in your soul, mate. I’ve been singing a Laura Nyro song called “Save the Country” that has a great line: “I got fury in my soul. / Fury’s gonna take me to the glory goal. / In my mind I can’t study war no more.” I still got fury in my soul and I can’t write in any other way.