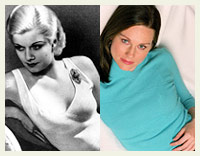 Some movie years are so bleak that there aren’t enough decent showcases for women to fill a best actress category. By that standard, last year wasn’t bad: The best actress nominees going into Sunday’s Oscar show — Joan Allen, Juliette Binoche, Ellen Burstyn, Laura Linney, and Julia Roberts — all had juicy roles and dominated their respective pictures.

Yet the stature of women in film today is a far cry from what it was 50 years ago, in the era of the women’s picture. Better still were the years 1929 through early 1934, just before the institution of Hollywood’s Production Code, a voluntary self-censorship system adopted by studios after critics complained of moral corruption on the big screen. In the pre-Code days, women’s pictures weren’t even called women’s pictures. They were called movies. They were films everyone wanted to see.

Today there is only one bonafide female box office draw in Hollywood — Julia Roberts. But in the ’40s and ’50s, female stars held their own, and in the early ’30s — the greatest era for women in American film — they dominated. Actresses such as Greta Garbo, Norma Shearer, Jean Harlow, Marie Dressler, Constance Bennett, Claudette Colbert, Kay Francis, Joan Crawford, Claudette Colbert, and Marlene Dietrich were box office stars, and if a male actor turned up on the cover of a fan magazine, it was a rare month indeed.

These actresses made movies at a time when the public wanted nothing more than to see stories about women. And because the films weren’t censored — the restrictive Production Code, which consigned women to virtue and virginity didn’t take effect until July 1, 1934 — they could deal honestly with changes in American society. In a sense, the modern woman of today — independent, sexually aware, armed with contraception — emerged during the 1920s. The pre-Code women’s films were reexaminations of morality, marriage, and the workplace in light of this new woman’s emergence.

All this changed with the enforcement of the Code, and thus began the slippery slide that brought us to the current state of affairs. A punitive sexual morality became law in Hollywood, which meant that if a woman had any fun she had to spend the last 10 minutes of every movie apologizing for having a life. We’ve seen these films: Bette Davis, Joan Crawford, Rosalind Russell, Margaret Sullavan, or whoever quits her job to marry some slob, and her surrender is celebrated. Even the better movies in this vein leave a bad aftertaste; for example, “The Philadelphia Story,” in which Katharine Hepburn spends the whole film atoning for her stridency. Atoning, in a sense, for having a personality.

These star vehicles still managed to thrive in the ’40s and ’50s, but they fell off in the ’60s, as more and more women stopped going to matinees and instead entered the work force. Since then, male-oriented genres have increasingly dominated — action, adventure, science fiction — and male stars have been the biggest stars.

This isn’t to say that today there aren’t enough talented and magnetic attresses to bring on a second golden age of women’s films. There are. It’s just that the vehicles aren’t there. These days it’s common for an actress to emerge, make a strong impression, and then disappear for a few years. Take Alison Elliott, who was amazing in 1997’s “Wings of the Dove,” and hasn’t been heard from since.

Even some of today’s more coveted women’s roles are just plain weird. Take Joan Allen in “The Contender.” She plays a senator hoping to be confirmed as vice president when rumors surface that she was once the willing focus of a gang bang back in college. Allen refuses to confirm or deny the report, standing on the principle, I guess, that it’s nobody’s business if the vice president is or ever has been the whore of Babylon. But what principle is being upheld here? If it were a man, shouldn’t we know if he had been one of the johns of Babylon?

Every era wants to believe that it has reached the apex of modernity and enlightenment. And yet to see pre-Code films is to realize that women are worse off on screen today than they were 70 years ago. In 1931’s “A Free Soul,” Norma Shearer plays a spirited young society woman who has an affair with a gangster (played by Clark Gable) because she likes the way he looks. There is nothing wrong with her. She’s desirable, even admirable, while in modern films, if a woman chooses to have sex with a man for purely carnal reasons, she has to be revealed as either evil or crazy.

Or pathetic, like the women in “Charlie’s Angels.” That film was actually praised by some last year as a feminist breakthrough. In this post-feminist view, Cameron Diaz’s wiggling her rear-end on camera for two hours was a statement of power, because she was smiling and participating in her own exploitation with a sense of irony. Men love this kind of irony. So who is the joke on, really?

When Shearer, Harlow, Colbert were sexual, they didn’t have to deflect disrespect with preemptive irony or disarming smiles. They pleased themselves like women who believed they had a right to, and it was also understood they had more going on than their allure.

The divorce of romance and sex is perhaps the most insidious legacy of the Code. With sex banned in 1934, romance became chaste. Then in 1968, with the collapse of the Code, sex came roaring back, but without romance. Romance had been discredited thanks to its 30-year association with lots of insipid and insincere movie love stories.

As a result, today when we say “sex and ____ ” the word that comes to mind isn’t “romance” or “love” but “violence.” That is the new cinematic marriage. In today’s cinema, the most misogynistic creations of the male mind are palmed off as “assertive, strong” women, with actresses parroting the party line in magazines and on talk shows. These magazine articles are usually accompanied by photos of the actresses in their underwear.

“Erin Brockovich” is considered by some to be strong women’s film because its about a foul-mouthed lady who dresses inappropriately and yet manages to be smarter than everybody else.

But the film that is truly reflective of women’s reality in America at the turn of the milennium is “You Can Count on Me,” a movie that deals with sex with a sense of humor and truth and without the kind of twistedness often found in modern films. Best actress nominee Laura Linney plays a woman who has an affair with her married boss (Matthew Broderick), and, despite the picture’s undertone of sadness, there’s a buoyancy about her behavior. Her choice is irrational and surprises even her. And yet she remains effortlessly in control of the situation.

In fact, she is in such control over her boss that the audience laughs in recognition: Women do have power, after all. It’s just rare we get to see it on screen.