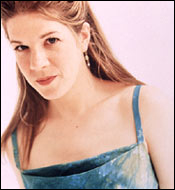 For singer-songwriter Dar Williams, saying the personal is political is like saying heroin is mildly habit-forming. In conversation, her mind zips from Chaucer to the Internet to Hillary Clinton, from corporate control of the media and the Green Party to her failed efforts to get her CDs banned from Wal-Mart.

Williams, who was discovered by Joan Baez in 1992 and has spent years making the rounds at Ben & Jerry’s Folk Festival and the Lilith Fair, has just released her fourth studio album. Titled “The Green World,” the disc is the most personal, political, and mature album she’s made to date.

“A lot of people think, ‘This is the album you should be making; this is the album we’ve been waiting for.’ So I hope that that’s the case,” said Williams, 33, in a recent interview in Vancouver, B.C.

On her previous albums, all recorded on the small indie label Razor & Tie, Williams veered toward the extremely personal and the too-earnestly political for most audiences. On “The Green World,” those extremes are gone, replaced by more considered and patient lyricism. Williams may find a place in the politico-folk canon with “I Had No Right,” a moving tribute to Daniel Berrigan, the poet and Catholic priest who, with his brother Phillip, burned draft registration files in Maryland in 1968 in an attempt to prevent young men from being sent to Vietnam.

Writing and recording political songs, says Williams, is less a salve on her own conscience than a tool to inspire herself and her listeners.

The new album won’t make everybody happy, and that’s fine by Williams. Despite her image of innocence and PC purity, she is really a dedicated contrarian. Her loyal fan base is a tough crowd — they’ve supported her through the days of self-financed albums and endless coffeehouse tours. They created perhaps the first significant Internet-based fan network for any recording artist, and they can be a bit obsessive. Williams says she no longer reads the main fan site, called DarWeb, or the email newsletter, because the criticism isn’t always constructive.

In recent years, such long-time fans have made noises about Williams’ “selling out” by bolstering her acoustic guitar and lyrics with with a slicker, more produced sound and more abstract lyrical content.

“I think that it’s an important check and balance to have that kind of mirror of your loyal fan base,” she says. But she isn’t going to sacrifice her own success to mollify the few. The disconnect is sometimes apparent.

“We did a free concert in Indiana in this total ‘bar’ bar. All black, black walls, no windows. And people came in and brought things — someone brought me an ivy plant, another kid brought along a violin, a woman brought dinner. Nobody drank. You can bring Dar into a rock bar, but you can’t bring the rock bar to my audience.”

But she’s not turning her back on the folk purists; she just wants the opportunity to grow her career, as she says, “organically.”

“An artist’s pursuit is to be an artist first, and not hold themselves to a genre for the sake of the genre. I mean, that’s as slavish as anything; that’s not faithful to the muse,” Williams says.

Friends and colleagues Richard Shindell and Lucy Kaplansky conspired with Williams in 1998 to produce the CD “Cry Cry Cry” shining a spotlight on less visible folk artists in North America. The trio covered a selection of folk songs by songwriters from the obscure (Julie Miller, Nerissa Nields) to the more recognizable (James Earl Keen, Greg Brown).

“‘Cry Cry Cry’ was very much trying to point to the fact that there’s incredible writing in what we call the folk movement in the past 30 years. And they’re really breeds of the regions they come from, in the same vein of keeping the ecosystem — in this case folk music as a whole — diverse. Like the song that Greg Brown writes because he’s a preacher’s son from Iowa is really different from the song that James Keelaghan writes about smokejumpers in Montana,” says Williams.

In her free time, Williams is working on a screenplay about a young woman working on a greenwashing campaign for a multinational corporation. Writing is nothing new: She cowrote the book “The Tofu Tollbooth,” a guide to veggie-friendly restaurants and organic food co-ops for the US traveller, now in its second edition.

Williams herself, however, gave up vegetarianism last year, and she is not about to apologize.

“I find myself making so many concessions. I was on a China boycott for a long time, and things kept popping up that were made in China that I didn’t even know about. I mean, this bag was made in China. When I bought it it was to save my back, which ideally is a good thing.”

“Yeah, but I believe in selfishness. I think that humorless activist thing is really dangerous. I love the fact that the young activists are making concessions to themselves,” she replies. “I mean, I heard that Ralph Nader lives in a one-bedroom house and gives away 90 percent of his income, which is great, if you can live that way fully. I mean, if we can get a Green Party really going in this country, I don’t want him freaking about styrofoam instead of drinking the damn cup of coffee so he can make a great speech.”