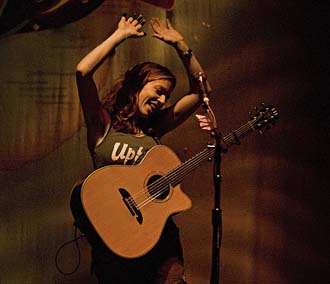 Photo by Flickr user Larry&Flo under a CC license.

DiFranco bears a similar brand, intended as a pejorative but worn by its target with pride. (A record industry executive once called her “every label’s worst nightmare.”) Armed with prodigious talent and an exhaustive do-it-yourself work ethic, the 28-year-old DiFranco has ridden a popular wave Up, Up, Up, Up, Up, Up (her latest solo album) to worldwide acclaim. For that trip, she has relied, not on the industry, but on her very own Righteous Babe Records, which has sold more than 2 million copies of her 15 releases to date. Her fans admire DiFranco as much for her steadfast independence and progressive business ethics as for her captivating songwriting and feminist politics.

In her collaborations with Phillips, DiFranco composes the music to accompany his tales of labor struggles and political corruption. Earlier this year, the pair released Fellow Workers, a sequel to their 1996 CD, The Past Didn’t Go Anywhere. We caught up with DiFranco in the midst of her recent tour with R&B great Maceo Parker.

Mother Jones: Over the past few years, you’ve been getting tons of big-time press: magazine covers, TV talk shows. That stuff sells records, but how does all this fame affect you as a person and as an artist?

Ani DiFranco: Having more exposure is kind of a bittersweet thing for me, honestly, because it’s nice to have a little more job security in life now. Then there’s the down side, having a lot of people who don’t really know what I do or what I’m about, but who have formed opinions about me based on what they hear in the media. It can be very frustrating and very deflating to be constantly defined and described by other people, so I’ve stopped reading anything written about me, and I find it much healthier. I just sort of concentrate on what I do and don’t worry too much about that.

MJ: You’ve moved from playing little bars to big auditoriums. As a performer, what has that transition been like?

AD: That’s been a tough one too, like right now I’m touring with Maceo Parker, whom I just adore, and we’re playing these big, open-air barns; they’re called “sheds.” They’re not very intimate. And what I do lends itself to an intimate atmosphere; that’s where it’s most immediately rewarding. It becomes more and more difficult to translate that to bigger places. It’s a catch-22. We’ve gone into smaller theaters and sold them out in a day or something, and then we get all these letters from fans saying, “We couldn’t get tickets. It’s not fair.” But then if we play these bigger places we get all these letters saying, “We used to be 10 feet from her and now she’s a little dot.”

MJ: You wrote a Los Angeles Times Magazine article on Joni Mitchell in which you noted that Mitchell was uppity, so the press painted her as a bitch, whereas Dylan, who was also uppity, was considered rebellious. Obviously, times have changed. So how do you think this uppity Ani DiFranco person has been portrayed?

AD: Well, I basically get stereotyped a lot in terms of being a girl and writing “chick” music for teenage girls or something. I think, if anything, the press kind of, because of my gender and my age, tends to kind of relegate my work to this sort of special-interest group. It’s part of the cultural dynamic, I guess.

MJ: Mitchell hated to be compared with other female musicians. Does that bother you too?

AD: Well no, actually. I don’t hate being compared with female musicians. I don’t mind that at all. I have no problem with seeing connections between women’s work. On the other side of the coin, I hate it when people don’t recognize the work of women as being universal, or having any import to the world at large, as opposed to men’s work, which is generally tends to be seen as more universal—men’s writing about their own experience tends to be put in a broader context.

MJ: In the LA Times piece you write, “Either you are a feminist or you are a sexist.”

AD: Well, I just see a lot of people who are really terrified of the “f-word.” A lot of women these days, a lot of young women don’t want to call themselves feminists. You have this cheap, hideous “girl power” sort of fad, which I think is pretty benign at best, but at worst, I think it’s a way of taking the politics out of feminism and making it some kind of fashion. I see a lot of young female performers—and Joni is kind of an older guard—who do not call themselves feminist, but would certainly believe in their own right to self-determination, and wouldn’t want anybody to stop them from becoming themselves. They just refuse to recognize the relationship between their lives and those of other women, or feel any solidarity there. And that scares me, because I think if we can’t use the word feminist, if it’s some kind of taboo or dirty word, or means you’re ugly, or you’re angry, or you’re not dateable [laughs], then you’ve just reduced the language by a whole concept. I just don’t know any other word than “feminist” that describes a person who believes women are people.

MJ: Repackaged rebellion seems to be a trend these days.

AD: Oh yeah, totally. The “alternative music” format on the radio. I don’t know—call me crazy—but I think it’s Top 40 with a slightly more distorted guitar, and anything that’s corporately co-opted. I think the music industry, for instance, is such a huge, multibazillion-dollar industry and it’s become very, very savvy. There’s a very short grace period in which actual human rebellion or resistance can thrive before it’s co-opted by these huge companies. And all of youth culture is packaged and sold back to us at this furious rate these days. I think it’s part and parcel to this corporate encroachment on our lives in general.

MJ: What have you learned from Utah Phillips about activist history and politics?

AD: Well, I’m aware enough, I guess, of American labor history. Utah, of course, has much more of a mind for names and dates and times, and has such a wonderfully eloquent storytelling style. Utah is such a wonderful teacher when it comes to American history, so I’ve certainly learned a lot of things from him and our friendship along the way.

MJ: How did you meet him?

AD: Well we share a booking agent and we were both staying at some doctor’s house one night many years ago, back in folk music’s sleep-on-somebody’s-couch days.

MJ: The new album, Fellow Workers, was done quite a different way than “The Past Didn’t Go Anywhere.”

AD: Yeah, The Past Didn’t Go Anywhere, I just took tapes of Utah’s voice and edited them down to basically make songs out of stories.

MJ: And these were prerecorded?

AD: Yeah, live recordings of him on stage. So I started to take things he said in between songs and try them over music I was making and I just improvised a bunch of music to sort of put a sonic landscape behind his stories. We decided to do that organically on the second record, as in: Go into a room together in front of an audience and try to execute something like that live.

MJ: The first album starts with Utah talking about his stories as a bridge between generations. Do you think your generation is showing much interest, from the feedback you’ve heard?

AD: Well yeah, I think that anybody who has the opportunity to hear Utah will pretty much respond on some level. I think it’s all a matter of what you’re exposed to. If you turn on the TV, you’re going to get a certain palate, and if you go looking underneath the surface, there’s a whole lot of stuff there that I think a lot of our generation would be really interested in.

MJ: Yeah, because I think most people of our generation have no idea who Mother Jones is, and if you listen to that song, it’s inspiring.

AD: Yeah, well that was the idea with this record, to really put some of these stories in a context that was very human and very emotional, and that people could relate to. Because one thing I do find in the “lost” generation or something is a kind of abhorrence of history, you know, like it’s boring, dumb, or just not interesting. I think it’s terribly interesting if you can get your head around how it relates to where you’re standing right here and now.