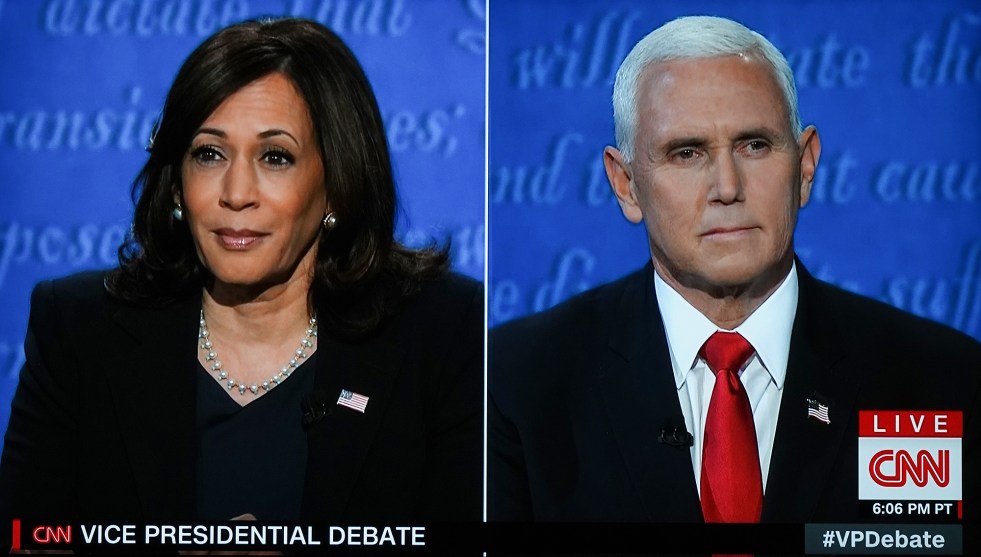 This was, needless to say, a less fiery affair than the first Trump-Biden debate. Pence kinda sorta tried to emulate Trump and talk over Harris, but his heart wasn’t in it and Harris shut him down pretty effectively whenever he tried. “I’m talking,” she said, as if lecturing a child, and Pence mostly caved in.

Both candidates dodged a question here and there, but I’m not sure most people notice this kind of thing unless it’s pointed out. Pence did this once, but Harris never did.

On climate change, notably, Pence basically said fuhgeddaboutit. Wildfires? It’s forest management. Hurricanes? Nothing to see here. Rising temperatures? Sure, but NO ONE KNOWS what’s causing it. It’s a mystery! This kind of thing goes over big with the Limbaugh crowd, but I don’t think it flies with the suburban voters that Pence and Trump need to win. Harris, by contrast, talked about climate change a bit mechanically, but basically soundly. She didn’t sound radical, just committed to renewable energy, green jobs, etc. I’d say she won this exchange pretty easily.

On the coronavirus, Harris naturally attacked the Trump administration record, and Pence tried to pretend that Harris was disparaging the sacrifices of the American people. This is something Republicans do all the time when the subject is war (“How dare you attack our boys in uniform!”) but I’m not sure I’ve ever seen it in this context before. Then Pence went on to say that he and Trump didn’t believe in “mandates”—a conservative bête noir from the Obamacare debate—and that’s why they allowed people to wear masks or not just as they pleased. This was pretty lame, though I’m sure the Trump base cheered it. Harris just plugged away on the theme of 200,000 American deaths, which was probably a smart thing to do.

I think this debate actually did a fairly good job of showing up the policy differences between the two sides. As for who won, I’d give it to Harris on points. Nobody scored any knockouts, but Pence’s mini-Trump act didn’t really work well and I’ll bet that most women were unimpressed with Pence’s inability to respect normal boundaries.

10:30 – Why can’t we all get along? Pence says that if you turn off the news, we already do get along. Harris says Biden is a bipartisan god.

10:27 – Pence gets the same question and also ignores it.

10:25 – What will Biden do if he wins but Trump refuses to leave the White House? Harris declines to waste time answering this, which I think is the right thing to do.

10:20 – Pence says Harris misquoted Trump when he said there were “fine people on both sides” of Charlottesville. Actually, I think she got it right. Not everyone does.

10:16 – Pence’s heart goes out to Breonna Taylor, but he trusts our justice system. So, no, the police did nothing wrong. In fact, Trump and Pence support law enforcement at all times and under every circumstance (more or less).

10:01 – As near as I can tell, Pence has been practically begging for Susan Page to call him out for talking too long. She finally did it. I can only assume that this is part of the Trump strategy of insisting that the press is thoroughly biased against him.

9:54 – Harris: “Trump has betrayed our friends and embraced dictators around the world.”

9:48 – Pence has gone all-in on accusing Harris of lying. But he does it nicely!

9:45 – Harris hasn’t really been willing to say much about Biden’s climate plan.

9:30 – Harris says Joe Biden will invest billions of dollars in innovation. I don’t know how true that is, but it’s nice to hear it getting a brief shoutout.

9:20 – Pence begs Harris to stop playing politics with the vaccine. That’s chutzpah, for sure, but I think it came across pretty well. He scored some points here.

9:16 – Pence is opposed to “mandates.” He trusts the American people to do what’s right. That’s why they didn’t insist on masks at the announcement of Amy Coney Barrett for the Supreme Court. Uh huh.

9:12 – Pence tries to pretend that Harris was criticizing the American people, not Pence, when she said that the administration’s COVID-19 strategy didn’t work. “The American people deserve credit for the sacrifices they’ve made.”

8:55 – My recollection from 2016 is that Pence lied a lot in his debate with Tim Kaine. Will he do the same tonight? I don’t see why not. Lying has become so normalized within Trump’s circle that it’s kind of shocking when they accidentally tell the truth occasionally. Unlike Kaine, however, Kamala Harris has the demeanor and discipline of a professional prosecutor, which is exactly what she used to be. She will be considerably more aggressive than Kaine was about tearing Pence’s lies to shreds. Will it work? We’re about to find out.