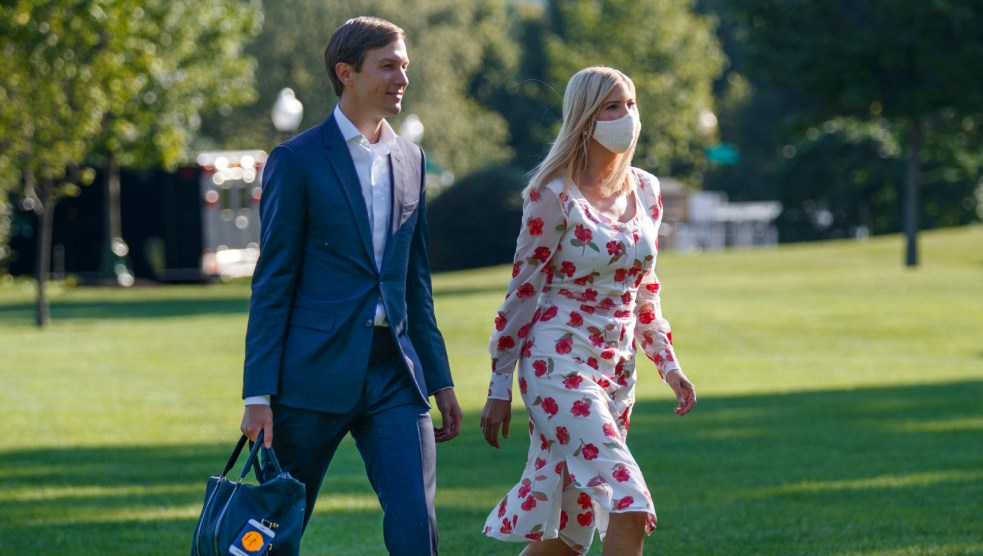 Ivanka is smart enough to wear a mask, but apparently Jared isn't.Shawn Thew/CNP via ZUMA

Katherine Eban has a longish piece in Vanity Fair about how the White House—and Jared Kushner in particular—handled the early days of the COVID-19 pandemic. For example, there’s a passage examining why Kushner and Trump showed little interest in a national plan:

Most troubling of all, perhaps, was a sentiment the expert said a member of Kushner’s team expressed: that because the virus had hit blue states hardest, a national plan was unnecessary and would not make sense politically. “The political folks believed that because it was going to be relegated to Democratic states, that they could blame those governors, and that would be an effective political strategy,” said the expert.

That logic may have swayed Kushner. “It was very clear that Jared was ultimately the decision maker as to what [plan] was going to come out,” the expert said.

This isn’t really a scoop, though, since it was widely known among reporters at the time. Kushner, who was a sort of free-roving coronavirus troubleshooter in the early days, apparently started out trying to put together a national plan with his team of college pals and young banker types, but it never saw the light of day. By the end of April, partisan considerations had overwhelmed everything. Kushner and Trump decided that instead of putting in place a plan that would effectively crush the virus, they wanted a plan that would most effectively boost Trump’s reelection plans.

OBLIGATORY NOTE: The White House, of course, denies all of this. Given their track record for lying about everything, however, there’s no need for you to take this seriously.

In any case, with Kushner in charge it’s not clear just how good a national plan would have been anyway. Kushner’s mysterious planeloads of pandemic supplies have been documented before, but Eban provides a case study of one particular Kushner brainstorm that illustrates how his “just get shit done” attitude played out in real life. The idea was to order millions of Chinese-made COVID-19 test kits from an outfit in the Middle East:

Normally, federal government purchases come with detailed contracts, replete with acronyms and identifying codes. They require sign-off from an authorized contract officer and are typically made public in a U.S. government procurement database, under a system intended as a hedge against waste, fraud, and abuse.

This purchase did not appear in any government database. Nor was there any contract officer involved. Instead, it was documented in an invoice obtained by Vanity Fair, from a company, Cogna Technology Solutions (its own name misspelled as “Tecnology” on the bill), which noted a total order of 3.5 million tests for an amount owed of $52 million. The “client name” simply noted “WH.”

I might be off base here, but the thing that really drew my attention was the invoice itself:

Does this even look like a real invoice? It’s not aligned right; it has misspelled words; there’s no customer information and no order reference; and just based on having seen lots of invoices in my time, it doesn’t look real. It looks like something that was whomped up in PowerPoint.

And that’s not all. The test kits were delivered in late March, but they were no good. “An FDA spokesperson told Vanity Fair the tests may have been rendered ineffective because of how they were stored when they were shipped from the Middle East. ‘The reagents should be kept cold,’ the spokesperson said.”

“The reagents should be kept cold.” No kidding. A freshman chemistry major could have guessed that. But this kind of planning is what passes for brilliant thinking among the Kushnerites and the Trump administration in general. Ideology aside, it turns out that it really does matter if the president of the United States is competent.