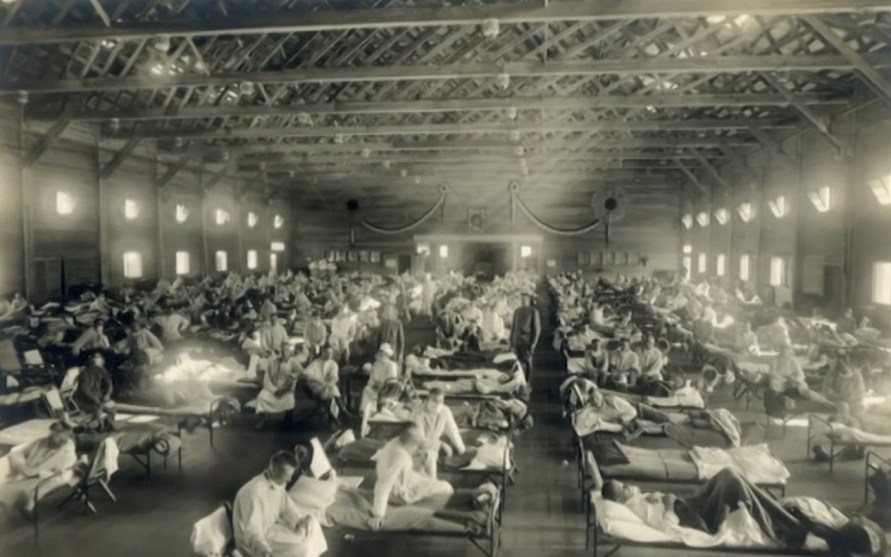 Patients being treated for Spanish flu in a makeshift hospital near Camp Funston in Kansas.National Museum of Health and Medicine

There is considerable fear that the coronavirus pandemic will have a large and long-lasting effect on the American economy. But will it? Here’s a summary from a 2007 Fed paper about the impact of the much more serious Spanish flu pandemic:

The influenza of 1918 was short-lived and “had a permanent influence not on the collectivities but on the atoms of human society — individuals.” Society as a whole recovered from the 1918 influenza quickly, but individuals who were affected by the influenza had their lives changed forever. Given our highly mobile and connected society, any future influenza pandemic is likely to be more severe in its reach, and perhaps in its virulence, than the 1918 influenza despite improvements in health care over the past 90 years. Perhaps lessons learned from the past can help mitigate the severity of any future pandemic.

Of course, there are also reasons to think that the Spanish flu had less economic impact than a big pandemic would have now. For one thing, we were on a war footing and that meant there was plenty of work for everyone even though certain industries suffered big losses. In fact, the combination of a war footing with the outsize death of prime-age workers meant that wages went up for everyone who survived.

It’s also arguable that the American economy was less centralized in 1918, which reduced the long-term damage. I’m not sure that’s actually true, though, nor am I sure it would have a big effect on recovering from a pandemic anyway.

On the flip side of the coin, health care is far better now than it was in 1918, and the government’s ability to stimulate the economy is considerably greater. Our transportation network also makes it easier to replace lost production in hard-hit areas with increased production in lightly hit areas.

Bottom line: from a cold-eyed economic perspective, the coronavirus pandemic is unlikely to be as severe as the Spanish flu, and the Spanish flu had a surprisingly modest effect on the economy in 1919 and beyond. Note that this isn’t an argument against aggressive fiscal stimulus if we need it. After all, that’s one of the reasons the coronavirus is likely to be less economically harmful in the first place. However, it does point in the direction of the coronavirus pandemic not having a large or long-lasting economic impact.