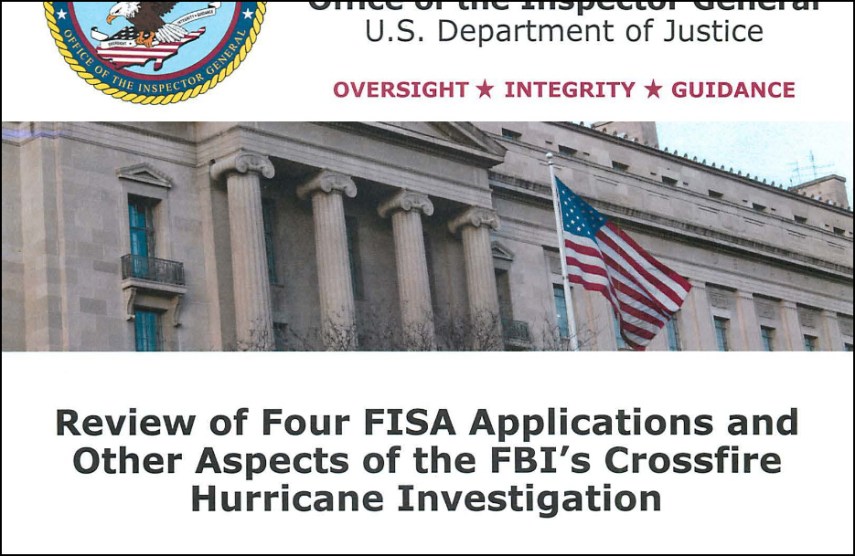 A Justice Department report has concluded that the FBI’s investigation of the Trump campaign’s links to Russia was entirely justified:

Investigators uncovered “no documentary or testimonial evidence” of political bias behind official actions related to the investigation, known as Crossfire Hurricane, said the report, which totaled more than 400 pages. The F.B.I. had sufficient evidence in July 2016 to lawfully open the investigation, and its use of informants to approach campaign aides followed procedures, the inspector general, Michael E. Horowitz, determined.

So that’s that, right? Of course not. Because there’s also this:

Mr. Horowitz also uncovered substantial dysfunction, carelessness and serious errors in one part of the sprawling inquiry: the F.B.I.’s applications for court orders approving a wiretap targeting Carter Page, a former Trump campaign adviser with ties to Russia, under the Foreign Intelligence Surveillance Act, or FISA. He found that one low-ranking F.B.I. lawyer altered a related document and referred the lawyer for possible prosecution.

Carter Page is a goofball who never had any actual influence with the Trump campaign. On the contrary: he was nothing more than one of the five names that Trump hurriedly came up with after promising to reveal his “foreign policy team” in early 2016, at a time when no one in the foreign policy community with a room-temperature IQ wanted anything to do with Trump. The FBI could have ordered a mob hit on Page and it would have had zero effect on Trump and his presidential campaign.

But that doesn’t matter. Page was one of Trump’s five names, and the FBI badly mishandled its application for a FISA warrant to wiretap Page. What makes this even juicier is that there’s a connection—modest but real—to the Steele dossier, the wellspring of conservative conspiracy theories about deep state attempts to sabotage all things Trump.

So it doesn’t matter that Page was a negligible part of the whole FBI investigation. The conservative goal, after all, is merely to manufacture doubt about it. And now they can. On prime time Fox News, it’s unlikely that true believers will hear anything about this report aside from the fact that the FBI relied partly on the Steele dossier in order to justify a wiretap on a member of Trump’s foreign policy team. They will hear nothing about this being evidence mostly of broad FBI mendacity and incompetence, not anti-Trump animus.

And the non-true-believers? They’ll rely on normal news sources which, like the New York Times above, will report honestly about the Page warrant being a massive screwup. A week from now, when the dust has settled, all they’ll remember is that there was a report that suggested . . . something. Wasn’t there something about a wiretap? And a dossier that turned out not to be true? Or something like that?

And with that, the conspiracy theory will live on forever in conservative lore, alongside the Benghazi “stand down” order, the IRS’s jihad against tea party groups, and Hillary Clinton’s erasure of 33,000 incriminating emails.

POSTSCRIPT: The genuinely unfortunate thing about all this is that the partisan bickering will overshadow the real conclusion we should probably draw from the OIG report: that FBI agents routinely file FISA wiretap warrants that, either deliberately or through incompetence, are neither fair nor truthful. And the FISA court just as routinely accepts them.