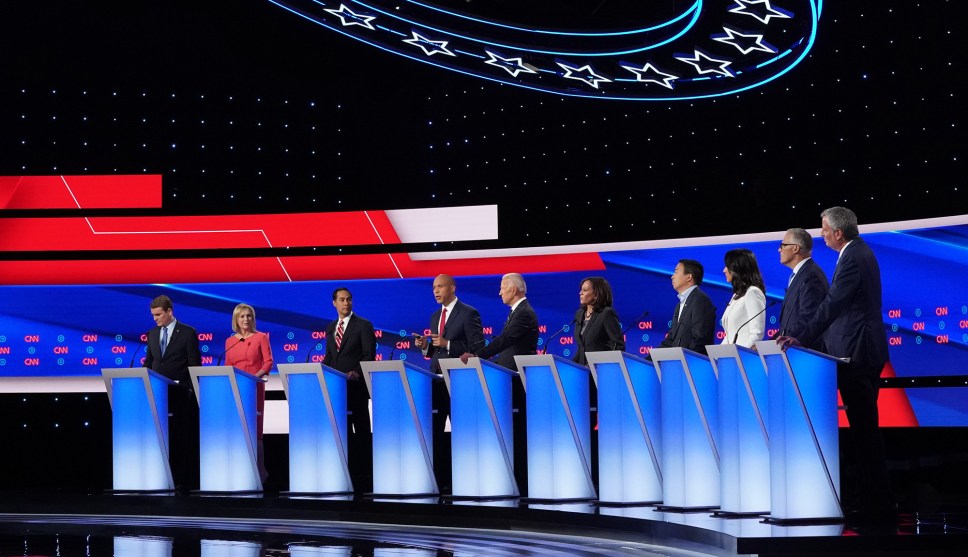 I think it’s safe to say that John Judis has more established lefty bona fides than I do. So it’s a little disturbing to read this from him:

I found the first two series of Democratic presidential debates painful to watch, and I don’t think it was simply the result of the format or of the questions asked. It was because in their preoccupations, I don’t think the Democratic candidates have developed the message and the language that can win the White House for the party.

Medicare for All has all the problems of past plans: it threatens higher taxes; and it comes across as another welfare program in which the middle class will have to subsidize the non-working poor….Trump’s nativist attacks against immigrants from South of the Border and his administration’s inhumane treatment of asylum seekers has had the perverse effect of pushing the Democrats toward a virtual endorsement of open borders….Senator Elizabeth Warren and several candidates, while bemoaning growing economic inequality, called for increases in legal immigration based on family reunification, which in the past has brought millions of unskilled workers into the labor market who compete for jobs with unskilled native-born and first-generation Americans.

….Trump has played upon a politics that could be described as “white supremacist.”…But in responding to Trump’s racism, Democrats have been using these terms in every other sentence — and add to that Senator Gillibrand’s high-toned blast against “white privilege.” In doing so, they are implicitly attacking not merely Trump but his past supporters and — even more important — people who are queasy about the Democrats for one reason or another. The terms also suggest that white voters have little to complain about, a message that won’t play very well in November 2020.

I also fear they think that in reiterating these terms — or in promoting reparations — the Democrats think they are courting black voters. In my experience — and I hope this won’t seem like some kind of weird racism — black adult voters are among the most sophisticated in the electorate. You could see it in Virginia after the various Democratic presidential candidates fell over each other to call for Governor Ralph Northam’s resignation for a 36 year old yearbook photo of questionable origin that had been publicized by a rightwing website angry about the governor’s stand on abortion. Virginia’s black Democrats, cognizant that Northam had not run a racist administration, or had a record of racism as a legislator, continued to back him. You see it in the continued African-American support for former Vice President Joe Biden in spite of Senator Kamala Harris’s attack against him for his decades-old stances on busing. Biden’s support might disappear, but again I think it is based currently on a reasoned assessment of who among the candidates is best equipped to get rid of Trump.

This usually gets treated by reporters as a big “Dems in disarray” kind of thing, but I’m genuinely not sure that’s the real fault line here. Rather, I think it’s the Twitterization of the left. No matter how carefully you curate your Twitter feed, and no matter how much you try to take Twitter with a grain of salt, it will inevitably overexpose you to a very specific subset of the progressive movement. This is not just the activist subset. It’s a group that’s way leftier, way louder, way less tolerant, way woker, way younger, and way whiter than the Democratic Party as a whole. Even if you think you’re sophisticated enough to understand this and account for it, spending time on Twitter almost certainly skews your view of the progressive movement.

This is what accounts for some of what Judis is talking about. Many of the Democratic candidates seem like they’re in thrall to the lefty twitterverse, deathly afraid of doing anything that might bring down a viral storm on their heads. And it’s hard to blame them, since campaign reporters also love Twitter, and will turn these viral shitstorms into page A1 stories in the New York Times.

I am more and more convinced that Twitter is a curse. We have met the enemy and it is us.