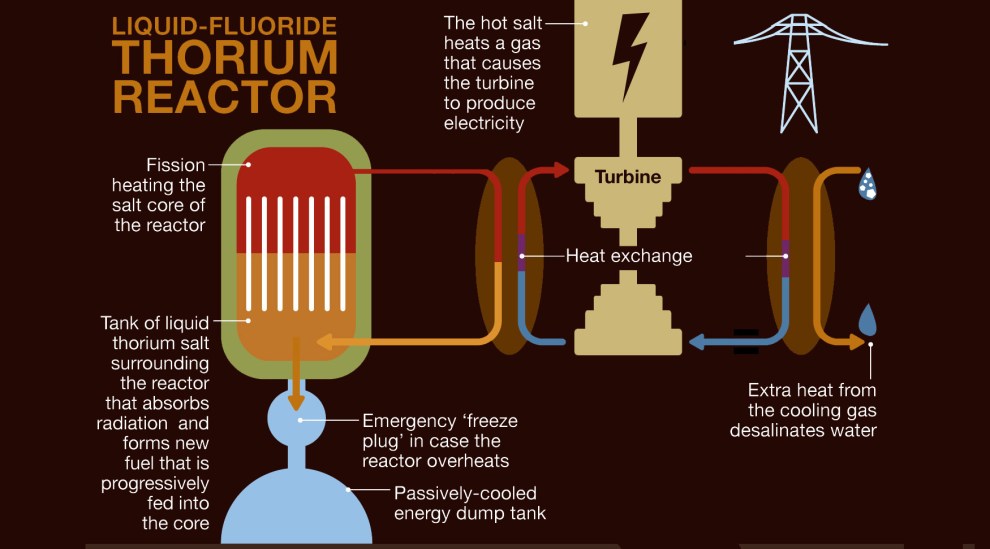 My post this morning about nuclear power touched off a considerable Twitter conversation, most of it based on misconceptions about modern nuclear reactor designs. I don’t want to get into a long defense of nuclear here, but I thought it might be worthwhile to at least provide a brief primer for people who haven’t really kept up with developments since Three Mile Island. Here are some of the main points:

None of this is uncontroversial. There are plenty of technical and engineering issues that you can read about if you’re interested. Just for starters, we have only limited experience with thorium reactors because of our decision decades ago to focus on uranium.

However, many of these points also apply to uranium reactors. They generally go under the rubric of Gen III or Gen IV designs, which you can read more about here. Even if you’re opposed to nuclear development, it’s worth boning up on this stuff so you don’t sound like an idiot when you get into a conversation with someone who knows something about the current state of the art.

It’s also good to keep in mind that every energy source has drawbacks. Would a huge buildout of nuclear cost a lot? Sure, but the same is true of solar and wind. Is nuclear waste a problem? Yes, but solar is only viable in parts of the world with lots of sun, and large-scale wind creates serious land-use issues. Is nuclear more expensive than oil and gas? At the moment, yes, but the costs of nuclear can come down if we invest in research. Besides, moving to a carbon-free world isn’t going to be free no matter how we do it. If the world isn’t willing to build out nuclear just because it would cost a few percent of GDP, then it means that the world is flatly unwilling to address climate change in any serious way at all. After all, any solution that takes money and not much else is by far the most feasible plan we have.

In the end, no one technology will rid us of our dependence on fossil fuels. Some of the answer will come from thorium reactors, some from uranium reactors, some from solar, some from wind, and who knows—maybe someday it will even come from fusion power plants. The only certain thing is that all of these technologies deserve buckets of money for research to make them ever cheaper, more reliable, and easier to maintain.