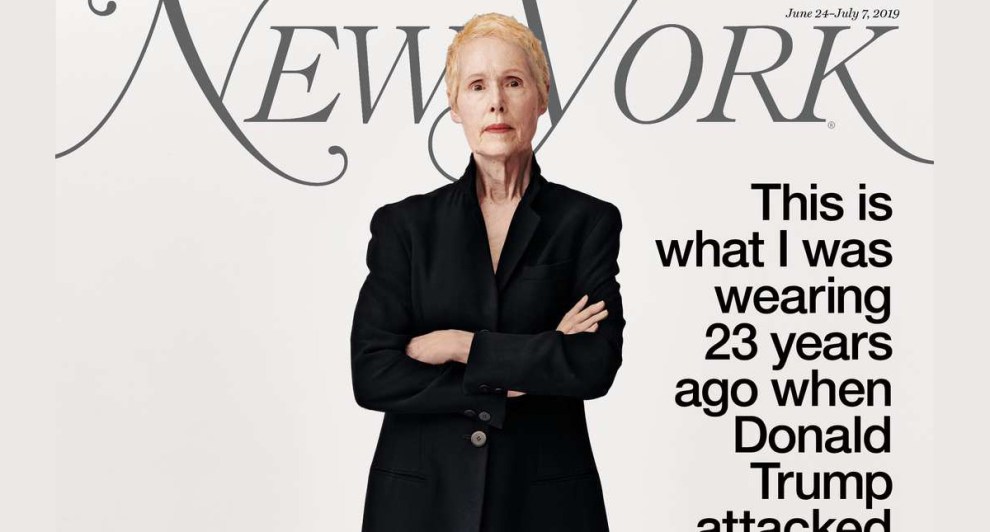 In the latest issue of New York, E. Jean Carroll says that Donald Trump raped her in a dressing room at Bergdorf Goodman in the mid-90s:

The moment the dressing-room door is closed, he lunges at me, pushes me against the wall, hitting my head quite badly, and puts his mouth against my lips. I am so shocked I shove him back and start laughing again. He seizes both my arms and pushes me up against the wall a second time, and, as I become aware of how large he is, he holds me against the wall with his shoulder and jams his hand under my coat dress and pulls down my tights.

I am astonished by what I’m about to write: I keep laughing. The next moment, still wearing correct business attire, shirt, tie, suit jacket, overcoat, he opens the overcoat, unzips his pants, and, forcing his fingers around my private area, thrusts his penis halfway — or completely, I’m not certain — inside me. It turns into a colossal struggle. I am wearing a pair of sturdy black patent-leather four-inch Barneys high heels, which puts my height around six-one, and I try to stomp his foot. I try to push him off with my one free hand — for some reason, I keep holding my purse with the other — and I finally get a knee up high enough to push him out and off and I turn, open the door, and run out of the dressing room.

The whole episode lasts no more than three minutes. I do not believe he ejaculates.

This episode hasn’t gotten an awful lot of attention. This is the first I’ve written about it, for example. Why? I don’t think it has anything to do with media outlets not taking rape allegations seriously. The real answer is almost worse: (a) everybody just assumes the story is true and (b) everybody knows that it will have no effect on either Trump’s fans or his Republican Party colleagues. Trump will issue a pro forma denial; nobody will take it seriously; and that will be that. Just like the other 15 times.

Even after more than two years, I wake up every morning and I can’t believe that Donald Trump is the president of the United States. It’s a stain we’ll never live down.