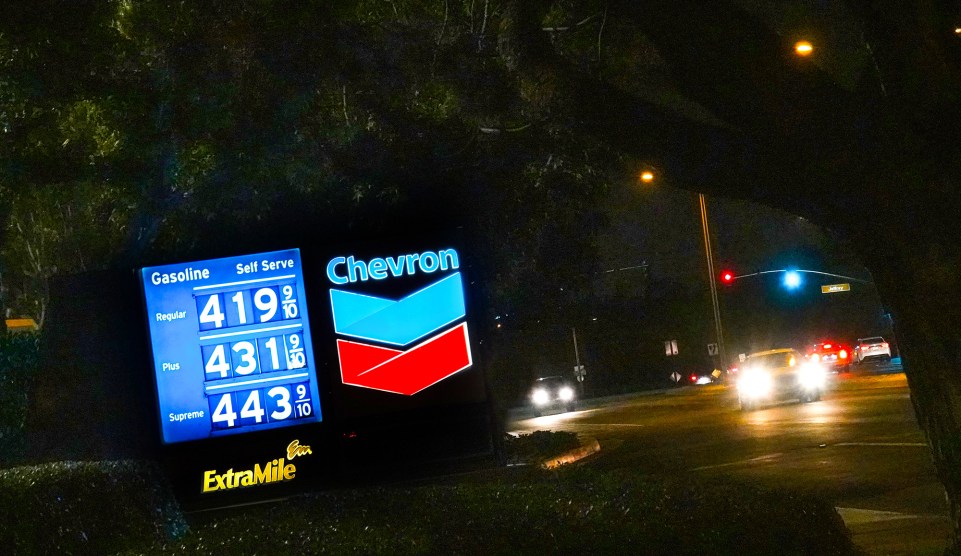 This is the price of gasoline at my local Chevron station. Up in Los Angeles you can find prices of $5 or more if you're lucky.Kevin Drum

My vacation along the Blue Ridge Parkway has rekindled my interest in a question I first asked a couple of years ago: why is gasoline so expensive in California? Near me, a gallon of regular costs about four bucks right now. But in Virginia and North Carolina, it’s closer to $2.65. That’s a huge difference, and it can’t be accounted for solely by the higher taxes and environmental requirements here in the Golden State. Here’s a chart showing the difference in price between gasoline in California and gasoline in “PADD 1C,” the federal government’s adorable abbreviation for the region of the East Coast from Virginia down to Florida:

Up until 2015, the California premium bounced up and down a little bit but mostly stayed in the range of 30-40 cents. This made sense. California gasoline taxes were about 25 cents higher than in PADD 1C, and because of special smog rules our gasoline costs an extra 10-15 cents to produce. Then, in early 2015, a refinery fire in Torrance took a bunch of production offline and caused a big spike in the premium. This also made sense.

But it took nearly two years for the premium due to the fire to finally wash out. And once it did—long before California raised its gasoline tax—the premium started to shoot up for no apparent reason. It’s continued to increase for more than two years now. This week the premium reached $1.33.

This is nuts. If you put everything together—taxes, smog rules, cap-and-trade, etc.—gasoline in California should cost maybe 40-50 cents more than it does in Virginia and North Carolina. Why is it nearly a dollar more than that?

What makes this even weirder is that it’s not just some irritable blogger asking. This was first highlighted by Severin Borenstein, a genuine expert who’s a former member of the California Energy Commission’s Petroleum Market Advisory Committee. He wrote about it in 2017 and then again in 2018. Even back then he figured the mystery premium was costing California $3 billion per year, and it’s probably doubled since then. Nevertheless, the response was . . . crickets. Everyone just shrugged and went about their business.

I’ve noted several times that every year, around the time we switch to summer formulations of gasoline, a number of refineries in California seem to mysteriously shut down due to “maintenance” or “accidents” or “labor issues” or some other reason. Outside sources usually can’t replace the lost production quickly, which results in shortages and price spikes even though the volume of gasoline sold in California is pretty predictable:

So not only does the mystery remain, it’s gotten even more mysterious over the past year. However, Governor Gavin Newsom has recently taken an interest, which means that yet another study will be produced. If it’s like the last one, it will conclude that the whole issue is really complicated, and really, who knows? But at least this time they’re starting off with the idea that market manipulation might—just might—be part of the problem. And why not? After all, Californians proved long ago that we were suckers for market manipulation by energy companies. Why not go to the well a second time?