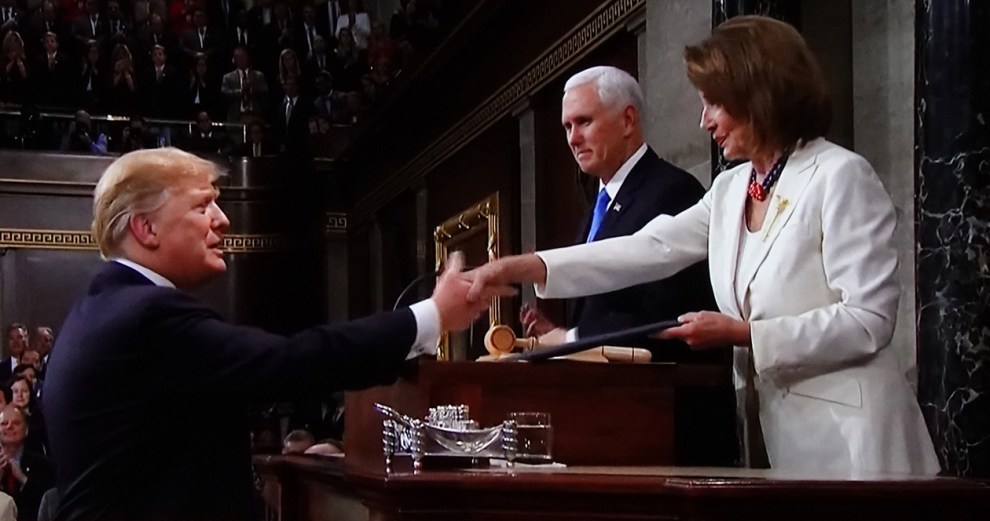 See? There's a new spirit of comity and bipartisanship breaking out in Washington these days.CNN

House Speaker Nancy Pelosi (D-Calif.) said Wednesday that she would be willing to support any compromise border-security legislation that emerges from a bipartisan committee and that she has urged the White House to adopt the same “hands-off” posture….Pelosi said she relayed to Senate Appropriations Committee Chairman Richard C. Shelby (R-Ala.), one of the lead negotiators, that “whatever you all come to an agreement on, bipartisan agreement, I will support it.”

“I hope that the administration would have the same attitude and respect for the appropriations process,” Pelosi said. “And I know they can find agreement.”

She added that she had relayed her hope to Vice President Pence “that the White House will have the same hands-off policy as I have vis-a-vis the appropriators.” Shelby later said that Pelosi did not promise to put the committee’s possible work product on the House floor but “said she would like to see a legislative solution, the sooner the better.”

I’m not quite sure I get this. Pelosi says she’ll “support” anything that comes out of the committee but hasn’t promised to give it a vote on the House floor. What does this mean? What am I missing here?

In any case, if Pelosi is serious about supporting a bipartisan committee solution, does this mean she’s confident that the committee won’t agree to anything that gives Trump money for his wall? Or is she signaling that she’d be willing to accept a compromise wall expenditure in return for, say, a permanent DACA solution or something like that? This is all very vague, but then, most good legislative leaders are maddeningly vague so that they can keep as many options open as possible. We’ll find out in a few days.