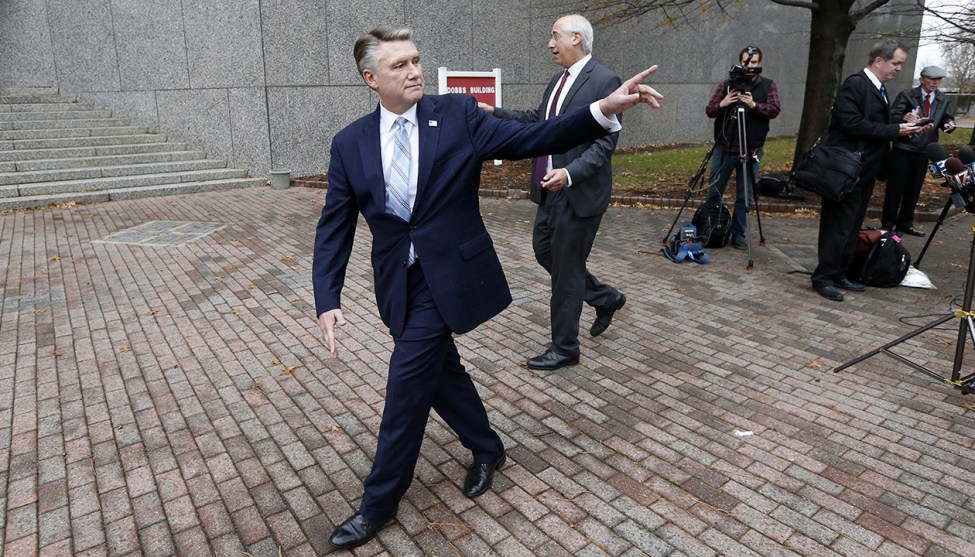 Mark Harris in happier days last month, before he knew his own son was going to testify against him.Ethan Hyman/Raleigh News & Observer/TNS via ZUMA

Have you been following the North Carolina vote fraud case? I have, but I haven’t been posting about it because nothing really explosive has happened lately. That changed today, when we all learned that Mark Harris, the Republican candidate in North Carolina’s 9th district, has a son. And that son, John Harris, is an attorney. Not just any attorney, either: he’s an assistant US attorney in the Eastern District of North Carolina. Today he testified about McCrae Dowless, the campaign operative hired by his father to get out the Republican vote:

“I love my dad and I love my mom,” John Harris said as his father cried. “I certainly have no vendetta against them, no family scores to settle, OK? I think they made mistakes in this process, and they certainly did things differently than I would have done them.”

….First in a phone call and then in subsequent emails, the younger Harris warned his father of both political and legal ramifications of hiring Dowless….He spoke to his parents on April 7, 2017, a day after the candidate met with Dowless. “I told him that collecting absentee ballots was a felony,” John Harris said, “and I would send him the statute that collecting ballots was a felony.” Later that morning, he emailed his father the statute that makes such actions a felony in North Carolina. He also emailed his fears abut Dowless, saying he believed the Bladen County operation was on “thin ice.”

Wednesday’s testimony to NC officials ended on an emotional note when congressional candidate Mark Harris teared up as his son, John Harris, read a statement about his parents’ actions.#ncpol #ncgov