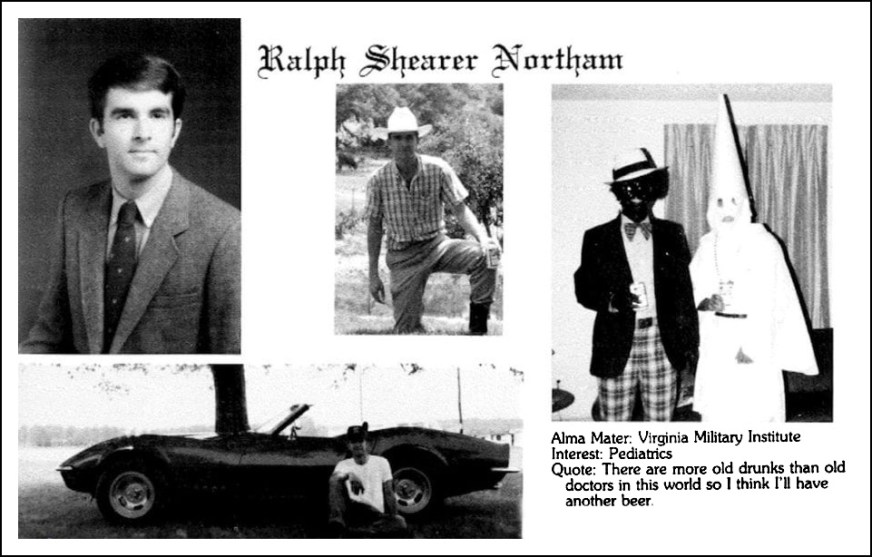 Is this Northam yearbook picture thing still dragging out? Surely Northam must see by now that his situation is hopeless?

I was chatting with a friend in Virginia this morning and mentioned that I normally live by the 20/20 rule:¹ I can forgive most things you did before the age of 20 or more than 20 years ago. There are exceptions, of course, but that’s my rule of thumb.

However, there’s a caveat: You have to fess up completely and not have subsequent black marks on your record.² This was Brett Kavanaugh’s problem. Even though I believed nearly all the allegations of harassment against him, I was willing to forgive his teenage behavior because teenagers are idiots. What’s more, Kavanaugh seems to have led an unproblematic life since he left college. His problem, however, is that he panicked when this stuff first came up and he denied all of it. I’m quite sure that was a lie, and that makes it an immediate problem, not one three decades in the past.

Northam has the same problem, but possibly even worse. I mean, first he confesses and apologizes for the blackface photo; then takes it all back and says it’s not him in the picture; and finally offers up a weird story about a different occasion when he put on some shoe polish for a Michael Jackson show. But he still refuses to say how this picture ended up on his yearbook page or why his friends apparently called him “Coonman.” This is ridiculous. Every minute that goes by without a coherent explanation makes it more and more obvious that he’s desperately trying to avoid the truth and instead cobble together some kind of story that will hold up to scrutiny but not make him look like a horrible racist.

For that alone he has to go. I know this isn’t a popular view right now, but if Northam had a decent explanation that he’d offered immediately, along with the appropriate apologies, I could probably forgive him.³ But he didn’t and he doesn’t.

¹Don’t get too pedantic about this. Obviously something you did at age 19 matters if you’re currently age 21. This is just a rough guideline, nothing more.

²There’s a reason for this: we should encourage people to own up to their pasts honestly. The only way this will happen is if there’s an understanding that doing so is likely to lead to forgiveness. Again, there are exceptions for some behavior, but an honest acknowledgment of your past should generally earn you something. If, on the other hand, we adopt a zero tolerance rule of demanding the death penalty for everything, no matter how long ago and no matter how much you’ve changed since then, the only incentive anyone has is to lie, lie, and lie some more. That’s completely pointless.

³Since some people are always eager to take this the wrong way, let me add this: I’m not insisting that everyone could or should forgive him. Just that I probably would.