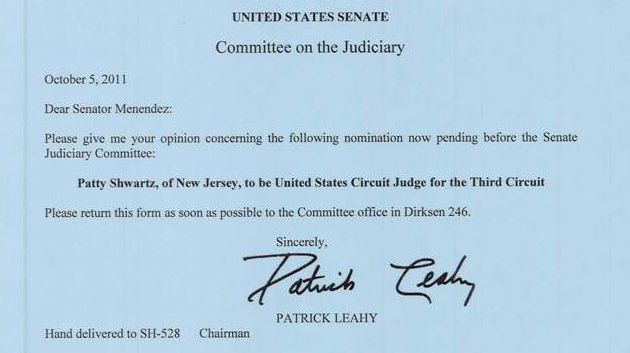 A blue slip from 2011, back when Democrats controlled the Senate.

The blue-slip process for judicial appointees has finally broken down completely:

Seattle attorney Eric Miller was confirmed as a judge on the country’s most liberal appeals court this week without the consent of either home-state senator, a break from tradition that Democrats say Republicans will come to regret….Before this week, a nominee had never been confirmed without the support of at least one home-state senator, the Congressional Research Service told The Washington Post.

The blue-slip process has weakened steadily over the past 20 years, and Republicans have edged closer and closer to killing it completely ever since Donald Trump was elected president. Various one-off scandals and compromises have just barely prevented this from happening, but now it finally has. And now that it’s happened once, it’s almost certain to happen routinely in the future. Mitch McConnell has made it pretty clear that his only priority these days is confirming conservatives for judgeships, and he’s determined to stuff as many through the confirmation process as he can while Trump is still president. This is an opportunity he never expected, and with legislation of any importance off the table thanks to the Democratic landslide last year, it’s now his legacy. A lack of blue slips from liberals senators was never going to slow him down.

Is there any upside to this? With blue slips now all but dead, the only thing really standing in the way of the Senate becoming a normal legislative body is the filibuster and unanimous consent. Those will be next to go, perhaps as soon as 2021. It will have been a long, crooked road that led to this point, but in the end it will be a good thing. Every state in the union and every country in the world seems to get by fine with normal legislative bodies, so why not the US Senate?