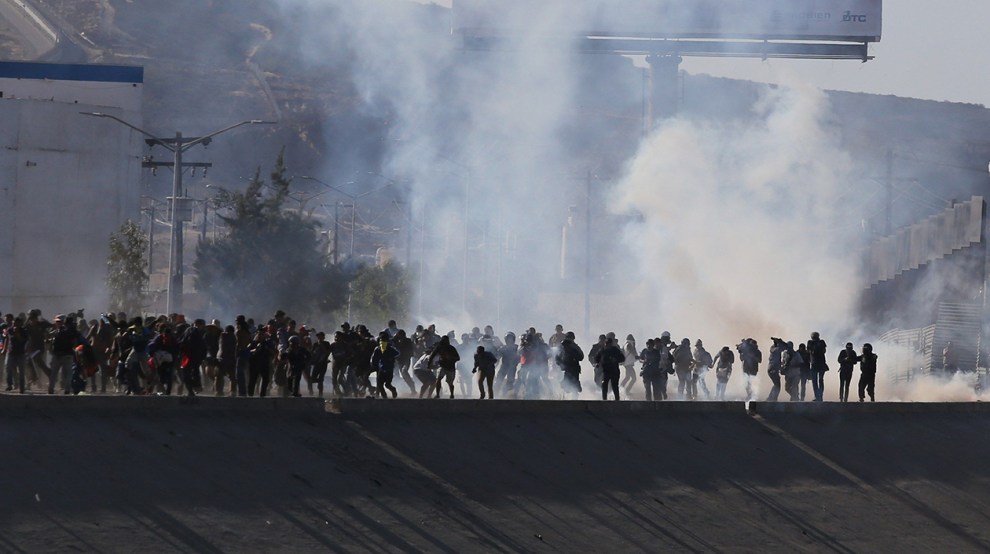 Border zealot Mark Krikorian argues that Democrats are too in favor of open borders—asymptotically, anyway:

Although Democrats routinely deny that they’re for open borders — dismissing the very suggestion as an outrageous slur — their reaction to Sunday’s violence by some of the Central American illegal aliens in Tijuana suggests otherwise.

….The border clash was the culmination of a series of policy choices by Democrats over the past several years, asymptotically approaching open borders. Although things are lousy in Central America, it was the Obama administration’s reaction to illegal immigration from there that created this flow. By releasing into the U.S. Central Americans bringing children with them, as well as releasing “unaccompanied” “minors” from Central America who were brought here by smugglers hired by their relatives in the U.S., the prior administration created a powerful incentive to head north.

For those of you who snoozed through math class, here is an asymptote:

The line never quite gets to zero, but it gets close enough that it might as well be zero. This is all based on Krikorian’s fantasy that President Obama put out a big neon sign begging refugees to come to the United States and then deliberately allowed them to escape into the vast howling tracts of the American wilderness, never to be seen again by the INS. There must be millions of them out there by now.

Then again, maybe not. Here is good old Politifact checking out the contention that asylum seekers get into the US and then all disappear:

One source of data comes from an Obama-era program that released asylees from detention and matched them with case managers who encouraged compliance with court-ordered obligations. As of April, the Family Case Management Program, or FCMP, had 630 enrolled families. Before the Trump administration ended the program in June, participants had a 100 percent attendance record at court hearings. They also had a 99 percent rate of check-ins and appointments with Immigration and Customs Enforcement, according to a Department of Homeland Security Office of Inspector General report.

“According to ICE, overall program compliance for all five regions is an average of 99 percent for ICE check-ins and appointments, as well as 100 percent attendance at court hearings,” the report said. “Since the inception of FCMP, 23 out of 954 participants (2 percent) were reported as absconders.”

In 2015, the immigration advocacy group American Immigration Council published a report that looked at studies from over the previous two decades that examined how well asylum seekers fulfilled their legal obligations. It found studies showed “very high rates of compliance with proceedings by asylum seekers who were placed into alternatives to detention.”

23 absconders! In other words, things were working OK back when Obama was in charge. The big problem was a lack of immigration judges, which meant that asylum cases took years to adjudicate. That would have been fairly easy to solve, but only if solving the problem were Donald Trump’s actual goal. Instead he deliberately made a hash of everything so that he’d have plenty of immigrant chaos to point to during the midterm election. Trump excels at making a hash of things, so this worked great.

But look: if you want to know the mainstream Democratic view on immigration, all you have to do is look at the legislation they’ve supported over the past decade. They supported compromise reform in 2006 and then again in 2013. They offered a compromise to President Trump, but were turned down when he changed his mind about what he’d accept. In all of these cases, the reason no progress was made was because of opposition from the hardline immigration wing of the Republican Party. You could almost say that, asymptotically, Republicans are opposed to any immigration legislation at all.

So if you want to demonstrate seriousness, introduce a bill that does only one thing: puts in place a truly vigorous version of E-verify. Maybe couple it with a DACA bill so that everyone can feel like they’re being good guys at the same time that they get tough on the border.

I don’t know for sure how Democrats would feel about this. But I know that Republicans would oppose it. They always have. You see, their donors like having lots of cheap labor, and that’s what truly motivates their inability to get anything done. They just don’t want to admit it.