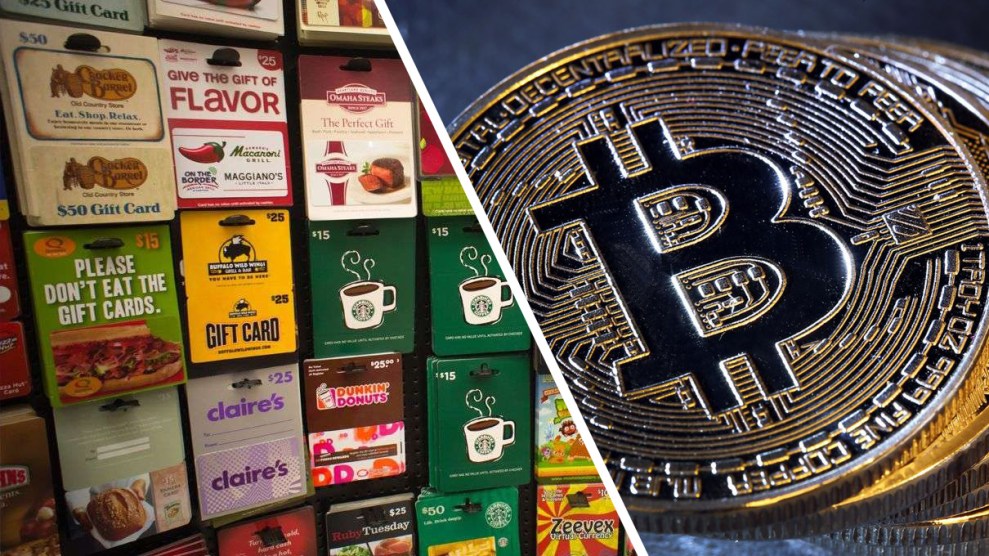 You may be aware of the scammers who pretend to be IRS agents and make phone calls demanding payment of back taxes. The most bizarre thing about this is that they want payment in gift cards. Gift cards! And yet this still doesn’t tip some people off. They scurry off to their local supermarket, buy a bunch of gift cards, and then provide the scammers with the serial numbers of the cards. David Dayen explains:

A Federal Trade Commission bulletin in May warned Americans of an epidemic of gift card fraud. Specifically, the FTC highlighted callers claiming to be with the IRS or a family member and asking for payments in gift cards. Unsuspecting victims then buy gift cards and hand over the codes. Scammers can use them to either buy goods and services, or flip them in the resale market while simultaneously draining them of funds, making money twice on the same card.

Because of this, several stores have cracked down a bit on the ability to buy gift cards with gift cards. However, it turns out there’s another aspect of this racket: Bitcoin. Dayen’s story is all about a guy who sells bitcoin at a markup to people who can’t acquire it on their own. He takes payment in gift cards, launders the cards into other gift cards at Walmart—thus protecting himself from being tracked down—and then uses the gift cards partly to buy stuff and partly to buy more bitcoin in order to keep his business going. There’s nothing especially illegal about any of this, aside from a technical terms-of-service violation. But something else struck me when I read about it.

This is a wildly Rube Goldberg sort of operation, and it only works because so many people who want bitcoin have trouble buying it. If this were merely because bitcoin is rare and hard to find, that would be fine. Likewise, if the markup were basically like a small brokerage fee, it wouldn’t mean anything. But it’s more on the order of 30 percent or so. This makes no sense. Bitcoin has a public price, just like a stock on the stock market, and it’s traded on a variety of exchanges. With competition like this, there should be no special problem buying bitcoin for a small brokerage fee if you have the ready cash to do so.

Apparently you can’t always count on that. But why would holders of bitcoin be unwilling to sell it for dollars at the going price? In any normal market, buyers and sellers would be established, the price would fluctuate a bit on a daily basis as bids and offers were matched up, and the market would clear. If that doesn’t happen—especially with a digital currency traded on digital exchanges—something ain’t right. There’s no weird black market in Exxon stock, after all.

This is, I admit, a tiny pebble in the mountain of evidence that bitcoin is fundamentally a fraud, with specific groups controlling the whole thing. But every mountain is built on small pebbles like this. It’s yet another reason to be very, very skeptical of bitcoin on every imaginable level.