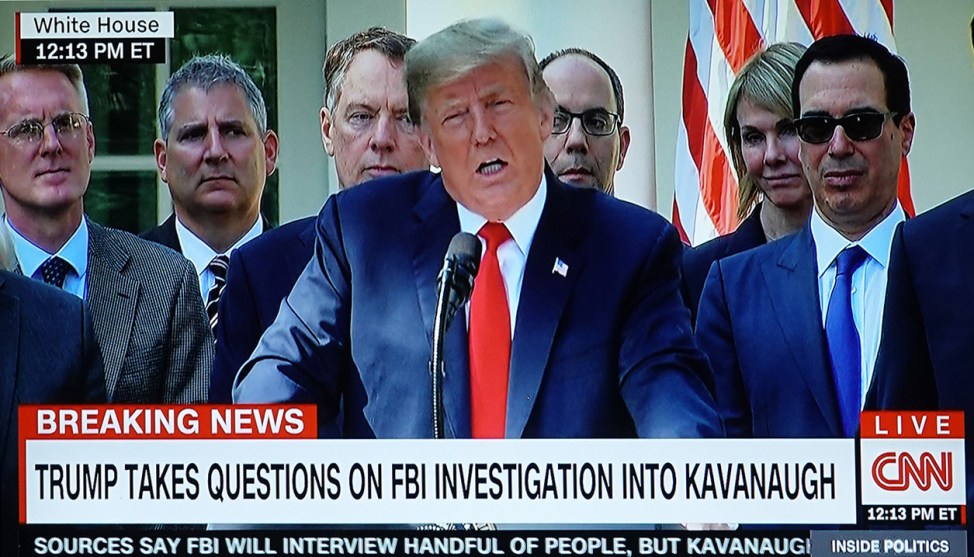 Having finished up with everything he knows about the new trade agreement, Donald Trump opens up the floor and begins talking nonstop about Brett Kavanaugh and the perfidy of Democrats, including but not limited to Richard Blumenthal, Cory Booker, and Dianne Feinstein. Also, he's totally OK with the FBI doing any kind of investigation wants, as long as Senate Republicans approve of it.CNN

The indefatigable Daniel Dale, Washington correspondent for the Toronto Star, has provided us with a detailed Twitter summary of Donald Trump’s Rose Garden speech about NAFTA 2.0, otherwise known as USMCA. This acronym, by the way, is going to be confusing for people who think Trump has concluded an agreement with the United States Marine Corps, but it turns out that USMC also stands for United States, Mexico, and Canada. Perhaps it should have been USCMA instead, which would have been easier to pronounce (oo-skee-ma) and less confusing.

Anyway, back to Daniel Dale. It would be copyright infringement for me to simply reproduce his entire tweetstorm, so instead I’m going to reproduce only the tweets about Trump’s lies. I think this will get me in just under the wire of fair use, but it’s a close call:

Trump repeats his lie about U.S. farmers selling to the European Union: “Our farmers aren’t allowed to sell over there…most of them.” The EU is the fifth-largest market for US agriculture, purchasing more than $11 billion last year.

Trump repeats an egregious lie: “Japan would never negotiate with the United States…they told the previous administration, we’re not going to negotiate.” Japan negotiated the whole TPP with the Obama administration.

Trump repeats his lie that Obama said, “essentially,” that you’re “not going to have manufacturing jobs.” Obama said *some* jobs were gone for good, but boasted about how many the U.S. still had. pic.twitter.com/ny4iHGAgI7

Trump repeats his false claim that U.S. officials had claimed 250,000 jobs would be created in the U.S. with the trade deal with South Korea. Obama had said KORUS would “support at least 70,000 American jobs.”

Trump describes this as a “brand new deal to terminate and replace NAFTA.” Again, it makes incremental changes to NAFTA without using the termination clause.