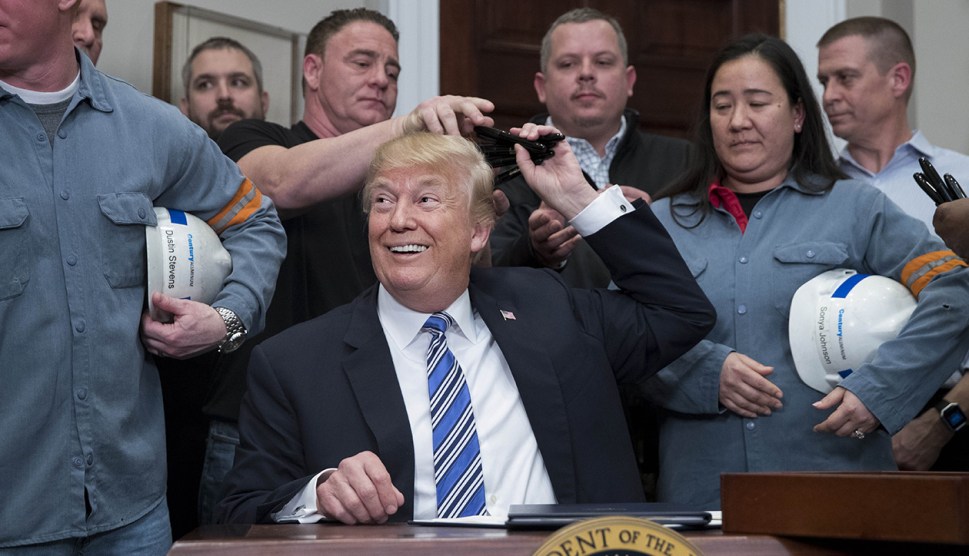 Donald Trump signs new steel tariffs in March surrounded by grateful steelworkers. Nobody in a suit is anywhere near. But when it comes time to dole out the windfall profits, Trump is having lunch on Wall Street and there are no visits to steel mills on his agenda. Funny how that works.Michael Reynolds/Pool/CNP via ZUMA

The steel industry was already in a period of renewal when Trump slapped 25 percent tariffs on steel imports….The tariffs sent the price of steel surging more than 33 percent. “We have a strong U.S. exposure; clearly we are a net beneficiary of the trade actions,” Aditya Mittal, chief financial officer of ArcelorMittal, said in August, according to Bloomberg News.

Trump has repeatedly cited the gains as one of the biggest upsides of his trade policy. After he visited the Granite City plant, video circulated of a steelworker being brought to tears by news of the plant’s expansion. “Trump has supercharged [the sector] with broad-based tariffs,” said Phil Gibbs, a steel industry analyst at KeyBanc Capital Markets.

That’s great! I guess us naysayers were all full of—

When President Trump imposed tariffs on steel imports in June, Richard Lattanzi thought of dozens of his fellow steelworkers who have for years put off badly needed repairs of their cars and homes. “There was a lot of excitement here; there were a lot of us saying, ‘It’s about time someone is looking out for us,’ ” said Lattanzi, the mayor of this town of 7,000 and a safety inspector at the U.S. Steel plant in nearby West Mifflin.

….Four months later, Lattanzi is less optimistic. Production at U.S. Steel’s facilities have ramped up, and the company announced this summer that, thanks in part to the tariffs, its profits will surge. But in interviews in recent weeks, Lattanzi and other steelworkers said they’re no longer confident they’ll take part in the tariff bounty.

….In its latest offer, U.S. Steel said it would give workers an immediate raise of 4 percent, followed by 3 percent annual raises later on. By the usual standards, that would be a good deal. But at the same time, the company said it is wrestling with soaring health-care costs in the long run….and that it needs to start asking workers to absorb some of those — namely by paying $145 per month for health care.

….But to the union, it was an upsetting plan. It would reduce the overall wage increase to just about 1.7 percent over nine years.

ArcelorMittal’s last contract with US Steel workers was ratified in 2016. According to the Kaiser Family Foundation, family health premiums have increased about $60 per month for large firms since then. For some reason, though, ArcelorMittal wants workers to start paying $145 per month. That’s about a thousand dollars per year more than their actual increase in costs. At the same time, they’re offering a raise of 4 percent, which comes to about 1.5 percent when you adjust for inflation. At a guess, that comes to about a thousand dollars per year. In other words, no net increase at all. But there’s more!

ArcelorMittal is also demanded sweeping concessions, including wage givebacks and cuts to vacation pay, as well as the elimination of profit-sharing bonuses for newer workers. Out-of-pocket health care costs will increase by up to $9,300 over the three years of the contract.

Well, who knows? Maybe that’s just union propaganda. But even if you account for that, it sure sounds as if steelworkers will at best come out even under the new contract proposal, but will probably come out worse. And that’s in the wake of a three-year period of no wage hikes.

In other words, somebody is getting rich thanks to the domestic steel boom caused by Trump’s tariffs. But as usual under Trump’s Republican policies, it sure doesn’t seem to be the workers themselves.