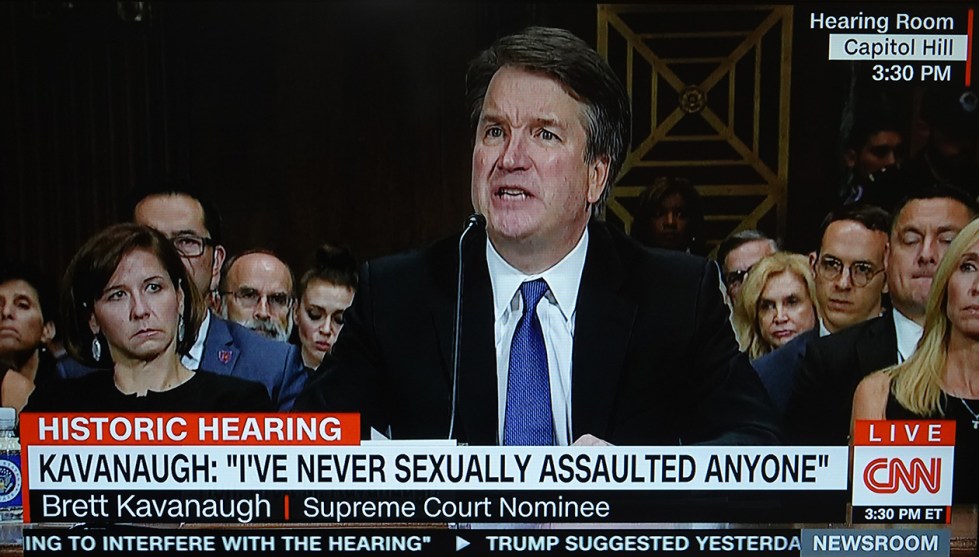 Hoo boy. Brett Kavanaugh is going all-in on the “coordinated conspiracy by Democrats” defense. That’s good red meat for the base, but will it work on anyone else?

A few minutes later, Kavanaugh breaks down while telling a story about his daughter praying for Dr. Ford. “Such wisdom from a ten-year-old,” he stammered. I’m pretty bad at reading emotions, so it’s hard for me to tell how credible his emotional display was. It seemed genuine to me, but then again, he obviously made a decision from the start to come out with guns blazing, a man who’s legitimately outraged at the false allegations being leveled at him.

3:35 — Kavanaugh is in a nearly continual state of emotional breakdown now. He’s sniffing and his voice is breaking, even when he’s talking about something as banal as football camp or why he kept calendars. This is a little puzzling, isn’t it? Or not?

The possibility hangs over all of this, one I return to over and over, that Blasey Ford’s account is absolutely true and that Kavanaugh has absolutely no memory of it and thinks he has been falsely accused.

3:40 — Hmmm. We have a new explanation of the “Renate Alumnus” comment in his yearbook:

Kavanaugh on his yearbook: Renate Alumnus was meant to show affection for her and that “she was one of us.” It wasn’t a reference to sex.

Ok, so now we KNOW he’s a liar. No one can believe that.

Yeah, this is not credible. It’s just not how teenage boys act.

3:55 — Another few shots at Democrats. “Thanks to what you on this side of the aisle have unleashed” I may never be able to coach again. Jesus. Can Kavanaugh even be any kind of judge after these repeated and brutal attacks on Democrats?

3:58 — Ah. Rachel Mitchell will be handling the Republican questioning of Brett Kavanaugh too. I guess I didn’t realize that.

4:05 — Kavanaugh responds angrily to Dianne Feinstein’s question about an FBI investigation. But this time the anger seems forced and fake. There’s also something else going on with Kavanaugh. It’s not just that he’s still just short of tears as he testifies, it’s the odd facial tics, the tongue in his cheek, the oddly pursed lips, and so forth. There’s something weird going on here.

4:10 — Is Kavanaugh’s anger and emotional breakdown for real? Or is this a carefully rehearsed persona because his handlers told him this is what a falsely accused man should sound like? I really, genuinely don’t know.