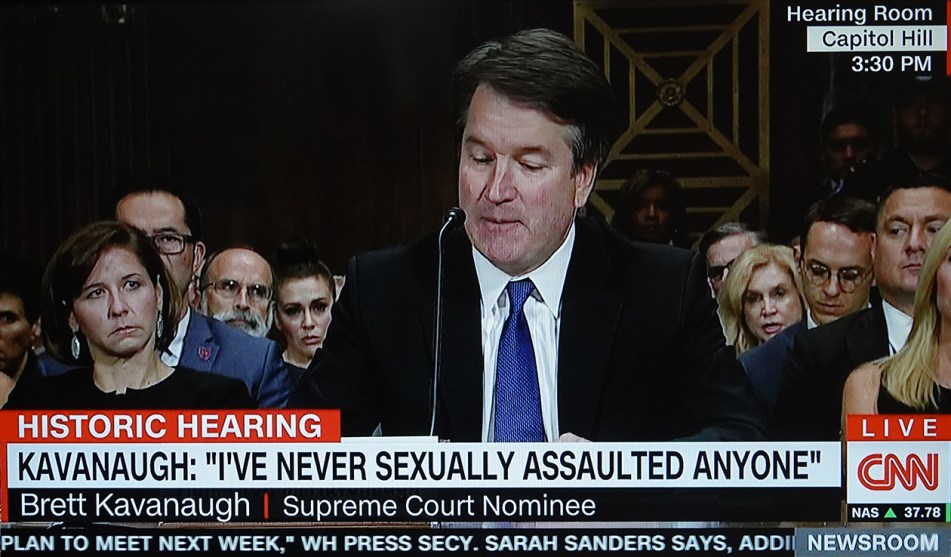 4:30 — Kavanaugh is tap dancing badly around Patrick Leahy’s question about whether he’d like Mark Judge to testify. He refuses to say that he’d favor having Judge appear under oath before the committee, instead banging on about how it should have been done weeks ago etc. etc.

4:35 — Kavanaugh refused to answer any of Leahy’s questions. It was just five minutes of filibusters about what a great person he was in high school.

4:45 — Uh oh. Chuck Grassley is doing his angry old man thing again. He’s mad at Dick Durbin for suggesting that Kavanaugh ask the committee to suspend its hearings until the FBI can complete an investigation. But Durbin persists. “Why would you resist [an FBI] investigation?” he asks, over and over. “Do you think it’s the best course of action?” Kavanaugh flatly refuses to answer.

4:52 — Even Kavanaugh didn’t quite seem to know what to make of Graham’s eruption.

4:55 — Whitehouse asks why he was the biggest contributor to the “Beach Week Ralph Club.” Answer: “I’m known for having a weak stomach.”

4:57 — Kavanaugh repeats his contention that “FFFFFFFourth of July” was a reference to a friend who always sniffed before he said the word fuck.

4:58 — John Cornyn is joining the Lindsey Graham club. It looks like the Republican line coming out of this hearing is going to be a unanimous assertion that this is the biggest, most loathsome character assassination in the history of the Senate.

5:01 — Where is Rachel Mitchell? Did Republicans decide to just ditch her?

5:05 — Amy Klobuchar is going back to the FBI well. But Kavanaugh is resolutely refusing to say that he thinks a further FBI investigation would be a good idea.

5:10 — Listening to Grassley rant about an FBI investigation, you’d think the FBI has no use whatsoever. I guess we might as well just defund the whole agency.