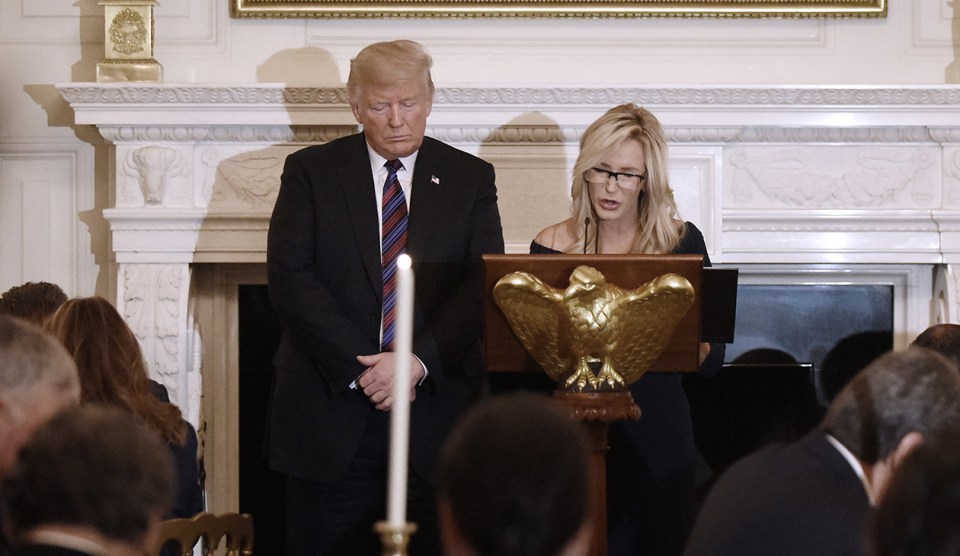 "Hmmm. Should I re-lower the flag for McCain? Ivanka and Sarah want me to. But I already raised it. Might look weak. And I really hate that little prick. Then again, it would drive tons of cable coverage, and all coverage is good coverage, right? Fine. I'll lower it just as soon as—" What? Oh, right, Amen.Olivier Douliery/CNP via ZUMA

Donald Trump lied to a bunch of evangelical leaders last night, but that’s no big deal. “Thou shalt not lie” isn’t actually one of the Ten Commandments, which is a good thing or else Trump would have self-immolated decades ago. However, he did make some progress in converting evangelicals into his very own private army of brownshirts:

At stake in the November midterms, Trump told the audience, are all the gains he has made for conservative Christians.

If the GOP loses, he said, “they will overturn everything that we’ve done and they’ll do it quickly and violently, and violently. There’s violence. When you look at Antifa and you look at some of these groups — these are violent people.”

First things first: telling his audience that the election is a referendum on “your religion” is refreshingly honest, since everyone knows that Trump himself has no particular religious beliefs other than “an eye for an eye—and then some.”

But the rest of it is—well, what is it? It’s not clear exactly what Democrats will overturn if they take power, but there are certainly a few things here and there they’d take a crack at. So that’s fair enough. But violently? If Republicans lose, Democrats are going to overturn free speech and the First Amendment and they’re going to do it “quickly and violently”? The only reason to say something like that is to prep your supporters to become violent themselves. Be ready to take to the streets if Democrats win! I guess that’s what Trump is girding his loins for.