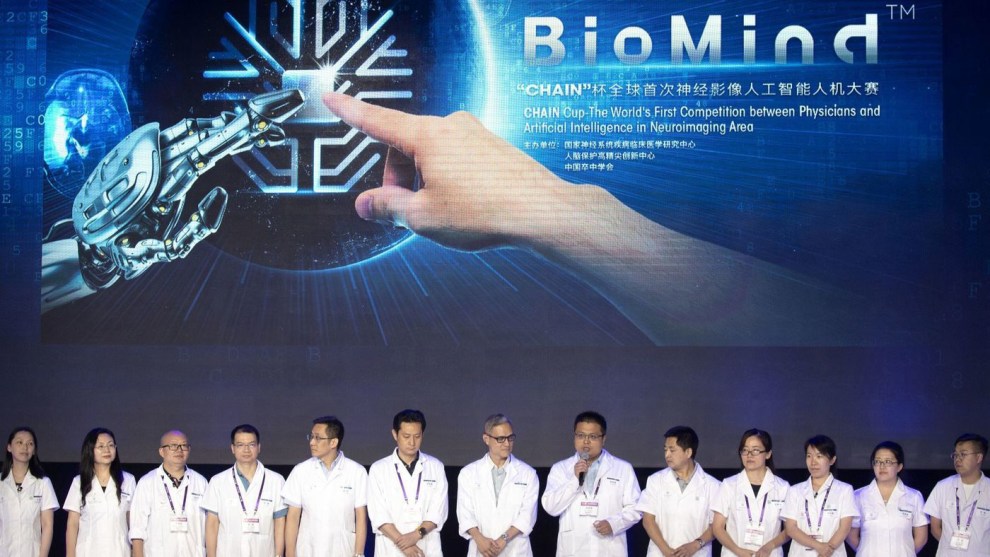 Chinese doctors line up to learn which work camp they will be sent to after they allowed their spirits to be comprehensively crushed into dust by a collection of running-dog silicon and soulless algorithms.Mark Schiefelbein / Associated Press

When the results came in, Biomind beat the doctors squarely in both rounds. In round one, it correctly answered 87% of the questions, versus 66% for the doctors. In round two, it won by 83% to 63%.

In the first round, doctors and computers competed to identify tumors. In the second round they looked for signs of stroke. And it was all done on a ritzy, live, Iron Chef style television show:

According to Raymond Moh, chief executive officer of Hanalytics’ Beijing office, Biomind diagnoses diseases with 90% accuracy, without fatigue. “The role of AI is not to replace doctors but to help to investigate blind spots: ‘ Please investigate further.’

….Last year a robot developed by iFlytek and Tsinghua University passed China’s medical licensing exam with a score that was higher than 96% of candidates. Yitu Technology — a facial recognition specialist — is involved in a project in Chengdu, capital of Sichuan province in southern China, to diagnose cancer, while Chinese tech giants Alibaba, Tencent and Baidu are all involved in AI health projects.

We’re still at the “don’t worry, robots are just here to help you” stage, but don’t be fooled. Radiologists are already in trouble, and if a robot can pass a medical licensing exam summa cum laude then how much longer can it be before robots are making house calls? Everybody thinks of truck drivers and retail clerks as the first victims of the coming robot revolution, but that isn’t necessarily the case. Jobs that require no tricky physical proficiency but very deep analytical skills are going to be some of the first to put people permanently out of work. In a sense, though, this is a good thing, since it means the challenge ahead will finally get some serious attention.

Of course, it will really get some serious attention when it starts putting journalists out of work. How long before that happens?

DEAR LOS ANGELES TIMES: Once again I have a polite request: if you put a fucking story in your print edition can you put it on your goddam website as well? Also: how much expertise does it take to at least have a working search function?