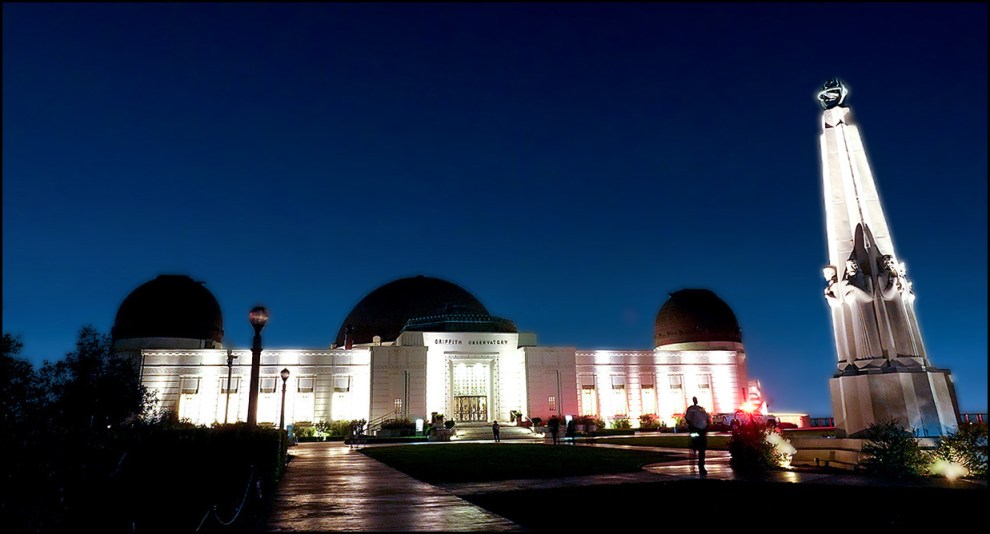 Bear with me here. This story has a long windup and an uncertain payoff. You have been warned.

As you all know, I’m awake all night on Thursdays thanks to my weekly dose of the evil dex.¹ On moonless nights I’ve been playing around with night sky photography. But what about the other nights? For the past couple of weeks I’ve been driving up to Los Angeles to putter around and take pictures of things. Here’s how this week’s trip went.

First, I headed for the Griffith Park Observatory to take a picture of the LA skyline. The observatory closes at ten, so I planned to get there around nine—and I would have made it if not for a minor wrong turn near the top of the hill. This got me distracted by a great view of the observatory with the moon rising just above it, so I spent some time taking pictures of that. I turned around just before ten and headed back up, but got stopped by a traffic control guy. They’d already closed the road to incoming traffic! But I cajoled the guy a bit, promised to do nothing more than a quick flyby, and he eventually agreed to let me in. It was a close call, but worth it since I ended up getting a truly spectacular picture out of it that I’ll show you on Monday.

Then I drove back down into LA and happened to walk by the construction site for a new Metro station. The gate was open on one end, so I went in and set up my camera to take a few shots of the excavation. The security guard came over since I wasn’t really supposed to be there, but I chatted with him for a bit and asked some questions about the site. He relaxed and was fine with me taking my pictures.

Next I headed to Spring Street, where I passed a homeless woman on the sidewalk who was ranting at everyone who passed by. (Her rant to me: Why is everyone walking around at midnight? How come no one goes to sleep anymore? Etc.) I set up the camera a little ways away and took some pictures of the old LA Times building and then walked back. As I did, the homeless woman was ranting at a nearby couple in a particularly unhinged way: she was white trash, her boyfriend was probably Mexican mafia, and when were Americans going to start standing up for what’s right blah blah blah. This went on, as these things do, and started to turn into an argument. I intervened gently and suggested we all just move along. The homeless woman was obviously seriously mentally ill and had no idea what she was saying. We all talked for a while as I headed back toward my car, and it turned out the couple was from Ohio and had never run into anything like this before. The woman hated being disrespected, but eventually calmed down and agreed that the homeless person had a badly broken brain and it was best to let everything be.

Finally, I went to Union Station, but it was closed. As I was walking back to my car, one of the security guards saw my camera and asked about my picture taking. We talked for a while, and he regaled me with his theory that we needed to do away with money. If we did that, he explained, we wouldn’t argue about money anymore. But what about sex, I asked? We’d still argue about that. Sure, but we wouldn’t argue about money anymore. He had a point! We talked for a little while longer and then he had to move some barriers to let a bus out. I made my way back to my car and drove home.

Here’s the punchline: to most of you, this all sounds very ordinary. It isn’t for me. Under normal circumstances I virtually never engage in conversation with strangers and I am very easily annoyed. That parking guy at Griffith Park? I probably would have gotten pissed, he would have told me rules were rules, and I would have huffed back down the hill. The security guy at the Metro site? I would have scurried off before he could even say anything. The couple getting mad at the homeless woman? I would have walked quickly by. The security guard at Union Station? I would have made some quick comment about the camera and kept moving.

So what was going on? The answer is peculiar but true: the evil dex makes me into a better person. I’m more conversational and less annoyable. I’m friendlier and more interested in people. I start from a very low base on these virtues, so it’s not as if I suddenly become a hale and hearty guy. But I move noticeably in that direction.

That’s very interesting. Just what is the dex doing? It’s a corticosteroid, so I suppose it’s not surprising that it might have some cognitive effects. But what exactly does it target and how does it work? More to the point, is there something out there that has the same effects but isn’t dangerous to take over long periods and doesn’t wreck my sleep? I’m thinking I need to make an appointment with a psychiatrist to ask about this. Every Thursday for a little while I’m a better version of myself, and I sure wish I could be like that all the time.

¹For those not yet in on the joke, I’m talking about dexamethasone, part of the three-drug chemotherapy cocktail I take weekly.