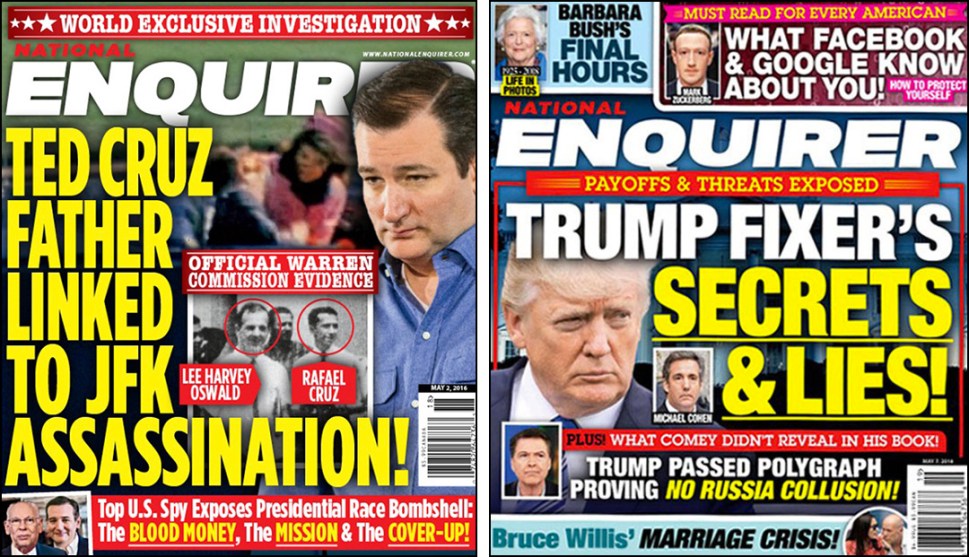 Left: An example of the Enquirer's handiwork during the 2016 Republican primaries. Right: More recently, the Enquirer seems to have suddenly soured on Trump pal Michael Cohen. I wonder why?American Media Inc.

Yesterday the Wall Street Journal reported that the National Enquirer has been served with a subpoena:

Federal authorities have subpoenaed the publisher of the National Enquirer for records related to its $150,000 payment to a former Playboy model for the rights to her story alleging an affair with Donald Trump, according to people familiar with the matter….Investigators are probing any potential efforts by Mr. Cohen to suppress damaging information about Mr. Trump during the presidential campaign [and] are examining whether the payment violated campaign-finance or other laws.

During the presidential campaign, National Enquirer executives sent digital copies of the tabloid’s articles and cover images related to Donald Trump and his political opponents to Trump’s attorney Michael Cohen in advance of publication, according to three people with knowledge of the matter — an unusual practice that speaks to the close relationship between Trump and David Pecker, chief executive of American Media Inc., the Enquirer’s parent company….During the campaign, “if it was a story specifically about Trump, then it was sent over to Michael, and as long as there were no objections from him, the story could be published,” this person added.

The Enquirer’s alleged sharing of material pre-publication with Trump’s attorney during the campaign highlights the support the tabloid news outlet offered Trump as he ran for president. It also intersects with a subject that federal prosecutors have been investigating since earlier this year: Cohen’s efforts to quash negative stories about Trump during the campaign. As part of that, prosecutors are also looking into whether Cohen broke campaign finance laws, according to people familiar with the investigation.

I Am Not A Lawyer™, and I’m definitely not a campaign finance lawyer. What’s more, as a media outlet the Enquirer has very wide First Amendment rights.

But…is there a point at which a newspaper’s endorsement turns into material support that essentially makes it into a PAC? If so, and there’s coordination between the PAC and the candidate that isn’t reported, is that a campaign violation? And if Cohen testifies that Trump knew all about this—which he certainly must have—does that put Trump himself in violation of the law?

Those are good questions! I assume some campaign finance experts will start weighing in on them shortly.