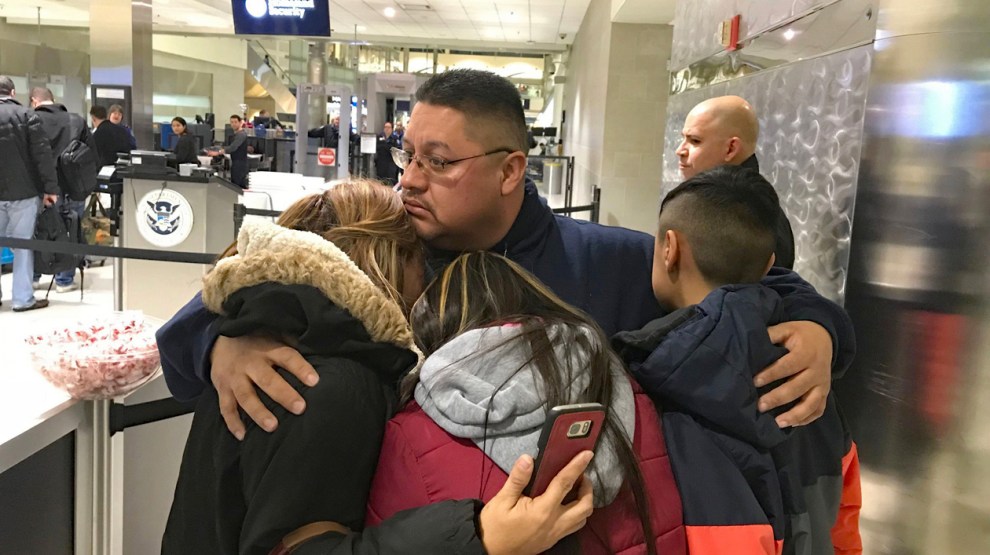 Jorge Garcia hugs his wife and children at Detroit Metro Airport, moments before he boarded a flight to Mexico. Garcia was being deported to Mexico after living in the U.S. for 30 years.Niraj Warikoo/Detroit Free Press via ZUMA

The Border Patrol union says that Donald Trump isn’t being tough on the border:

This deployment, he said, has proved to be far more limited — despite the Trump administration’s claims. “They’re not allowed to be in the public eye. They’re not allowed to be in our lookout and observation posts, even in Texas,” he said, the busiest area of the border for migrants and drug smuggling. Judd said agents had complained about the restrictions to National Guard commanders, but “they just ignore the concerns.”

This is yet another example of Trump talking big but accomplishing little because he has no idea what the issues really are and what kind of actions to order. He just tweets out a command to deploy the National Guard to the border, basks in the applause, and then assumes everything will just work out.

And we also have this:

A top official with the Department of Health and Human Services told members of Congress on Thursday that the agency had lost track of nearly 1,500 migrant children it placed with sponsors in the United States, raising concerns they could end up in the hands of human traffickers or be used as laborers by people posing as relatives.

….From last October to the end of the year, officials at the agency’s Office of Refugee Resettlement tried to reach 7,635 children and their sponsors, Mr. Wagner testified. From these calls, officials learned that 6,075 children remained with their sponsors. Twenty-eight had run away, five had been removed from the United States and 52 had relocated to live with a nonsponsor. But officials at the agency were unable to determine with certainty the whereabouts of 1,475 children, Mr. Wagner said.

Things like this would give any normal person pause about how they handle children who have crossed the border. But not Trump. A few days ago he ordered that children who crossed the border illegally with their parents would be separated from them. John Kelly explained the plan: “The children will be taken care of — put into foster care or whatever.” So not just cruel, but incompetent too. They obviously don’t give a shit: it’s just something that’s theatrically inhumane enough to satisfy the bloodlust of Trump’s base. Once again, it’s big talk that accomplishes nothing. It’s all Trump has ever been good at.