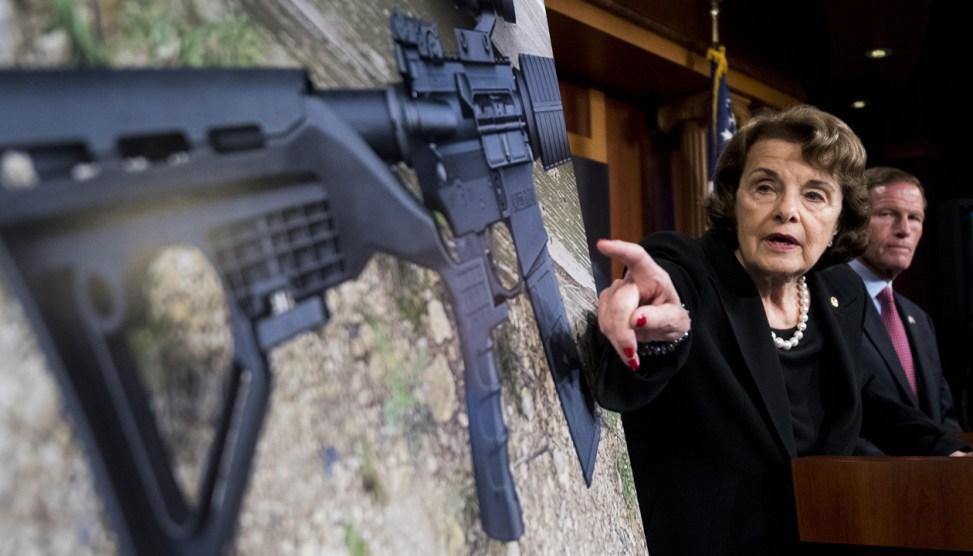 Sen. Dianne Feinstein in 2017, introducing legislation to ban the sale and possession of bump-stocks. Her bill went nowhere, of course, thanks to NRA opposition and Republican cowardice.Bill Clark/Congressional Quarterly/Newscom via ZUMA

Obama Administration legalized bump stocks. BAD IDEA. As I promised, today the Department of Justice will issue the rule banning BUMP STOCKS with a mandated comment period. We will BAN all devices that turn legal weapons into illegal machine guns.

This is actually sort of true, more or less. That’s unusual for Donald Trump. But the reason it’s true is that Obama didn’t interfere when the ATF concluded in 2010 that the law gave them no authority to regulate bump stocks. The Kenyan socialist gun-hating dictator-in-chief then followed the law! Hard to imagine, isn’t it?

Needless to say, Sen. Dianne Feinstein and others have introduced legislation over the years to ban bump stocks as part of a very modest assault weapons ban, but these bills never saw the light of day thanks to NRA and Republican opposition. Last year, Feinstein introduced a bill limited just to banning bump stocks, but it also died thanks to NRA opposition and Republican timidity. Big surprise, eh? So now Trump is going to try to do it via executive order.

Will this work in the face of previous rulings that bump stocks are legal under current law? Will the NRA sue to overturn the EO? If they do, who will the courts side with? We could know the answers to all these questions next week if Republicans simply passed a bill to ban bump stocks. The original ATF ruling was based on statutory interpretation, not constitutional law, so a new law would clean up any confusion instantly. But Republicans are afraid to take even this tiny step for fear of crossing the NRA, so instead we probably won’t know for years.