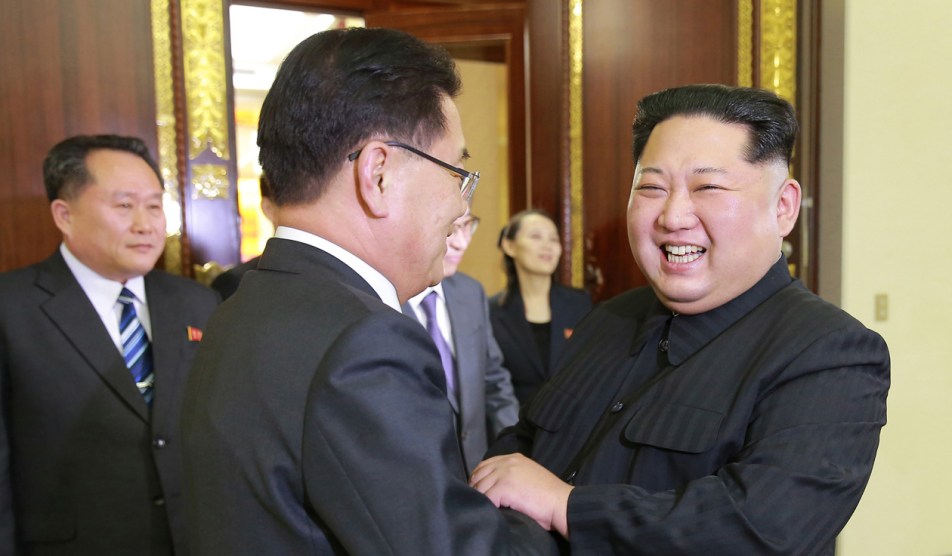 I must have taken a really long nap this afternoon. Apparently we’ve been holding talks with North Korea for the past few years and now President Trump is ready for a summit meeting with Kim Jong-Un to wrap things up:

President Trump has accepted an extraordinary invitation by North Korean ruler Kim Jong Un to meet this spring, White House and South Korean officials said Thursday….Chung Eui-yong, South Korea’s national security director, said in an unusual statement to reporters at the White House that the North Korean ruler had expressed “his eagerness to meet President Trump as soon as possible” and that Trump had agreed to do so.

What year is this? Speak up, please. Still 2018? And we’re doing the summit meeting first and then the talks? And nobody from the State Department knew about this? And the summit is solely to “discuss” denuclearization? Is Donald Trump the stupidest man alive? If you want to know what’s going on here, Jeffrey Lewis has the right take:

North Korea has been seeking a summit with an American president for more than twenty years. It has literally been a top foreign policy goal of Pyongyang since Kim Jong Il invited Bill Clinton. (1/3)

I wonder if Trump’s “aides” have explained that to him. Or, if in their toddler-handling, they have led him to believe that this offer is something unusual. Or perhaps he imagines that only he can go Pyongyang. (2/3)

This is literally how the North Korean film “The Country I Saw” ends. An American President visits Pyongyang, compelled by North Korea’s nuclear and missile programs to treat a Kim as an equal. (3/3)https://t.co/l3TqT2v8KL

PS: To be clear — we need to talk to North Korea. But Kim is not inviting Trump so that he can surrender North Korea’s weapons. Kim is inviting Trump to demonstrate that his investment in nuclear and missile capabilities has forced the United States to treat him as an equal.

Even given Trump’s usual cavalier attitude toward everything, this is damn strange. What does South Korea think of this? What does China think of this? Does anyone know anything about why Kim is on such a charm offensive lately?