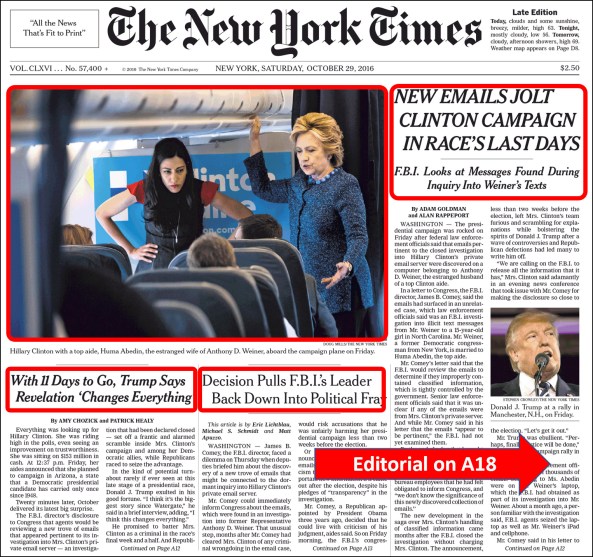 Take Donald Trump’s refusal to release his tax returns. That got covered. Once. But then there was nothing to follow up on, so it died. It may have been outrageous, but beyond the fact of the refusal itself, there’s not much to say about it and not much you can dig up.

Some of these are better scandals than others, but what they all have in common is that they produced a steady drip of news. Here are the kinds of things that can produce news:

The Hillary email affair is probably the archetype here. Judicial Watch submitted FOIA requests and got a judge to order the emails released to the public. Congressional hearings went on endlessly. The FBI investigated whether classified material had been mishandled. Every few weeks there was a new tranche of emails to pore over. And of course all of these things generated leak after leak after leak.

Now that’s a scandal. There’s constant news, so it stays in the public eye regardless of how serious it is. By the time it’s over, so much stuff has been released that most people have no idea how it ended. They just know that they’ve been hearing about it for over a year, and where there’s smoke there’s probably fire.

Most of the scandals that liberals tried to pin on Donald Trump were the exact opposite of this. They were one-offs that generated a day or three of news, but not much more. Even the Access Hollywood video was like that. Once you’ve seen it, you’ve seen it. Trump is a pig, and either you care or you don’t. After a few days, there’s no more blood to be squeezed out of the onion.

The lesson here for the press is not to give something more coverage than it deserves just because lots of different actors are working together to generate daily news. The lesson for Democrats is to find better scandals and promote them more effectively.