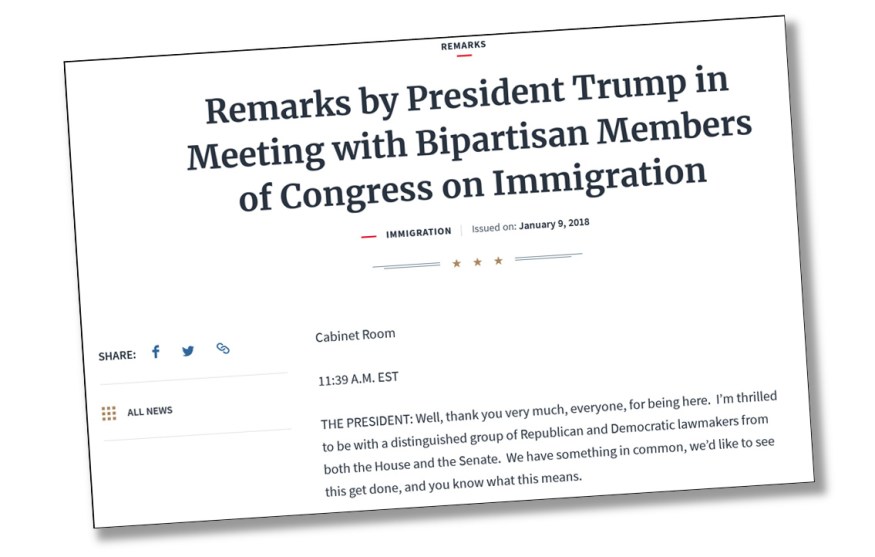 Yesterday’s televised session on immigration is being spun as evidence that President Trump isn’t senile. You might think Trump’s supporters would be touting something a little more upbeat than “not senile,” but that’s hard to do when Trump demonstrated virtually no understanding of a subject that has literally been his signature issue for the past two years. Pretty much the best you can say about Trump’s performance is that he didn’t fall asleep or start telling stories about his old days on The Apprentice.

Matt Yglesias has the right take on this. As he (and everyone else) has noted, Trump was obviously confused even about DACA, the topic that Congress has to decide right away:

The key exchange of the afternoon came when Sen. Dianne Feinstein (D-CA) asked the president if he might like to completely abandon his administration’s stated position on the issue under discussion and, instead, adopt the Democratic position. At this point, you would expect a Republican Party politician to restate the Republican Party’s position on the issue….Trump, instead, just said he agreed with Feinstein!

So pliant was Trump that when Sen. Dianne Feinstein (D-Calif.), one of the most liberal members of the chamber, asked if he would support “a clean DACA bill” that protects the dreamers with no other conditions, the president sounded amenable. “Yeah, I would like to do it,” Trump said.

Trump’s apparent concession so alarmed House Majority Leader Kevin McCarthy (R-Calif.) that he interjected himself, although he was careful only to gently contradict the president….McCarthy apparently was not the only one concerned by Trump’s seeming agreement with Feinstein. When the White House released its official transcript Tuesday afternoon, the president’s line — “Yeah, I would like to do it” — was missing.

A White House official said that any omission from the transcript was unintentional and that the context of the conversation was clear.

“Unintentional.” Sure it was. Just like it was last July.

This episode shows not just that the White House is dishonest, but that it’s stupid. Doctoring a transcript to remove the one line that everyone gasped at in real time is idiotic. Apparently one of the new tasks of the press in the Trump era is going to be scouring White House transcripts for errors. Unintentional though they may be, surely we’re all interested in keeping these historical records accurate. Right?