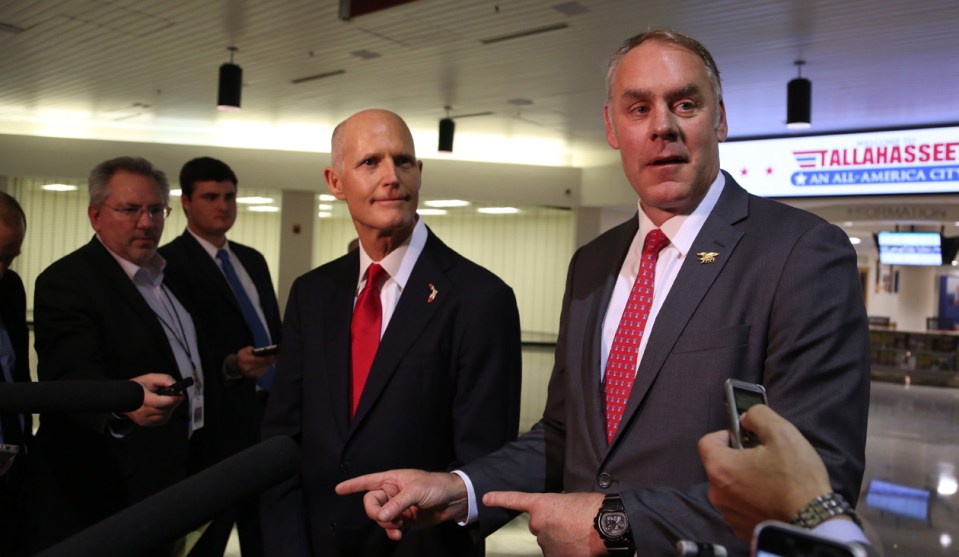 The guy with a smile on his face is Florida governor Rick Scott. And why not? The other guy is Interior Secretary Ryan Zinke, who has just agreed to exempt Florida from new rules opening up offshore oil drilling everywhere else.Scott Keeler/Tampa Bay Times via ZUMA

Read my full statement on taking #Florida off the table for offshore oil and gas. Local voice matters. pic.twitter.com/fJhv0p0CDC

“Local voice matters.” But only as long as that voice is a Republican governor in an important swing state. West coast states with Democratic governors who didn’t vote for Donald Trump can pound sand. Ditto for Virginia, which opposes drilling off its coast. Ditto for northeastern states, all of which oppose drilling off their coasts. You guys didn’t vote for Trump, so tough luck.

To state the obvious, the problem here isn’t so much that California is likely to see lots of new offshore oil rigs in its future. Lease auctions for public lands in the West haven’t attracted much bidding, and I suspect the same will be true for offshore leases. Rather, the problem is that the Trump administration is being run like the mafia, with friendly states getting explicitly favorable treatment and enemy states—this is how Trump seems to think of them—being gleefully punished. This attitude has already spread to Republicans in Congress, who crafted their tax bill with petty punishments of blue states as a top priority.

This is not—repeat not—something that Democrats have ever made a habit of. The stimulus bill treated every state fairly. Obamacare treated every state fairly. Even in judicial appointments, a favorite playground for partisan politics, every state was treated fairly. But now Republicans are doing their best to bring back the kind of frankly punitive spoils-system politics that we all thought had been long abandoned. We’re sure learning a lot these days about what “conservative” means in the 21st century.