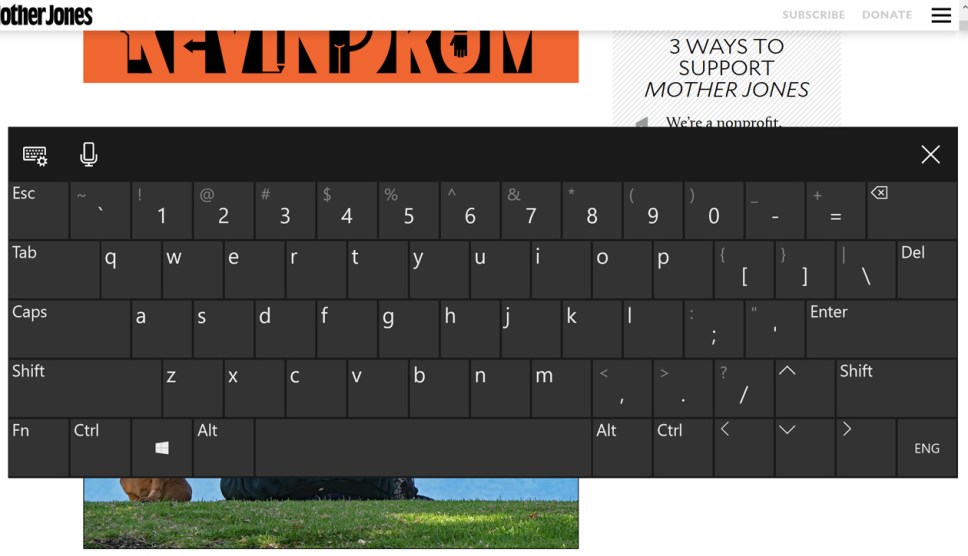 I’m about to post some serious stuff—honest—but first I have to get something off my chest. I have never been as pissed off about an operating system “upgrade” as I am over the new on-screen keyboard in Microsoft’s latest Windows update.

The old OSK was fine. It took up about a third of the screen (vertically), included both letters and numbers, and the keys were plenty big even for me.

The new OSK takes up nearly half the screen, and it can’t be moved offscreen temporarily. If you try, it bounces back so the whole keyboard is visible. This means there’s very little screen space available when the keyboard is active, and there are times when you can barely see stuff in the middle of the screen no matter where you put the OSK. What’s even worse, the new OSK doesn’t allow you to highlight text. You can’t hold down the Shift key and use the arrows for highlighting. Since double tapping text is a very hit-or-miss affair on a Windows tablet, this means there’s literally no way to highlight text anymore.

I know how petty this sounds, but why? Why ruin a perfectly good keyboard? And even if Microsoft needed a new one to satisfy complaints of some kind, why not keep the old one around too? It’s still there in the code, after all. I know this since it pops up during boot when I need to enter my password. But there’s no way to access it during normal use.

This single, seemingly trivial change has made it all but impossible to blog on the tablet. I can still do it, but it’s hardly worth the effort, and it inflates my blood pressure every time I try. It’s really infuriating.