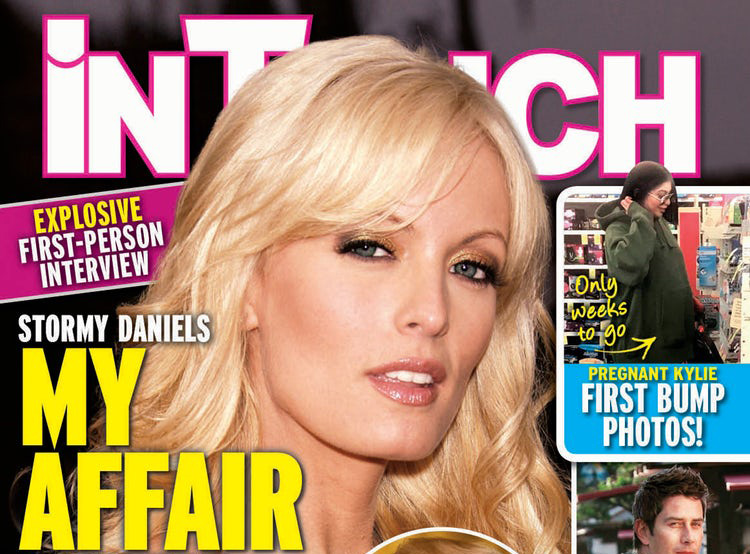 It all started at the American Century celebrity golf tournament in July 2006. “[Trump] was introduced to everybody. He kept looking at me and then we ended up riding to another hole on the same golf cart together,” Stormy recalled, adding that the business mogul later came to the gift lounge her adult-film company, Wicked Pictures, sponsored and asked for her number, which she gave him, before they posed for a photo together.

“Then he asked me if I wanted to have dinner that night. And I was like, ‘Yeah, of course!’” she told In Touch. Stormy, dressed up to go out on the town, arrived at Trump’s hotel room, where she says she was greeted by a bodyguard named Keith, who let her inside. Stormy claims Trump was sprawled on the couch watching TV, wearing pajama pants. “We ended up having dinner in the room,” she revealed to In Touch.

At one point, Stormy told In Touch, she excused herself to go to the bathroom. “When I came out, he was sitting on the bed and he was like, ‘Come here.’ And I was like, ‘Ugh, here we go.’ And we started kissing.” After having sex, Stormy said, “We hung out for a little while and he just kept saying, ‘I’m gonna call you, I’m gonna call you. I have to see you again. You’re amazing. We have to get you on The Apprentice.’”

It sounds like Stormy had a great night! As for the sex itself, she described it as “textbook generic.” That’s really going to piss off Trump.

In Touch says that Stormy’s account was corroborated at the time by “her good friend Randy Spears and supported by her ex-husband Mike Moz.” So now we’re up to three news outlets that knew about the hookup: In Touch, Slate, and Fox News. Two of them knew about the hush money, but none of them wrote about it during the campaign. How many more are there?