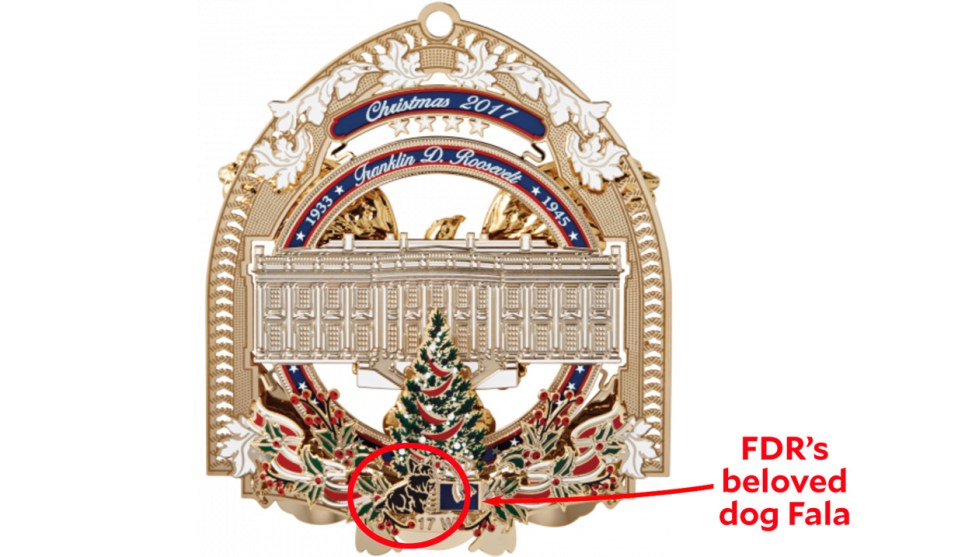 Will Fischer is not excited by the design of the official Trump Christmas ornament:

No, I don’t think so. What it really reminds me of is something old fashioned. This kind of imagery was popular in the late 19th and early 20th centuries, and it seems like that was the probable inspiration for whoever designed this.

But what I’m really curious about is the initials at the bottom center. It looks like a D, an A, and an…I? Or maybe an F? What’s this all about? The answer will probably suprise you:

The Official 2017 White House Christmas ornament honors the administration of Franklin D. Roosevelt, who served as the thirty-second president of the United States from 1933 to 1945 and his remarkable journey to restore the faith of the American people….The eagle cartouche emblazoned on the speaker’s stand at President Roosevelt’s first inauguration is the inspiration for the main element of the 2017 ornament. The two flags below have forty-eight stars each….The shape of the ornament is reminiscent of the silhouette of a tabletop radio – similar to those many Americans had in their homes and used to listen to the president’s reassuring Fireside Chats. Roosevelt’s beloved Fala is pictured on the back of the ornament.

Right. The initials are F, D, and R. But why is Donald Trump honoring the Democratic Party’s greatest president? Well, it turns out that the White House Historical Association designs the ornaments. In 2016 it was inspired by Herbert Hoover. In 2015 it was Calvin Coolidge. In 2014 it was Warren G. Harding. I detect a pattern!

The first White House ornament, in 1981, was Angel in Flight. In 1982 it honored George Washington. Then the Historical Society worked its way though the rest of the presidents, with occasional interruptions, until 2002. In 2003 they did Ulysses S. Grant, and it’s been presidents every year since then. So this year it was just FDR’s turn.

Trump will get his own ornament in 2030—unless he decides to disband the Historical Society and direct that all future ornaments should honor himself. But no. He wouldn’t do that, would he?