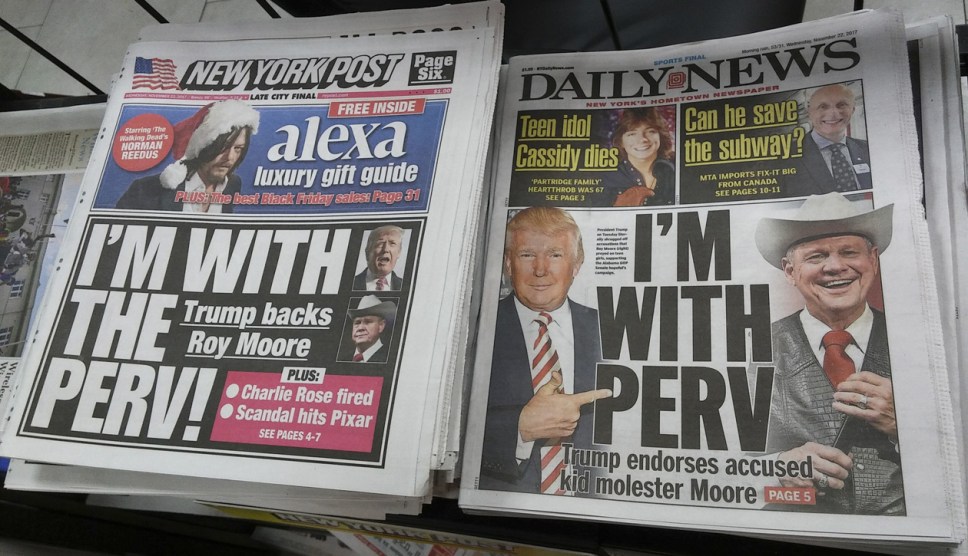 Until today, Republicans could say that, officially at least, they have repudiated Roy Moore’s noxious behavior.¹ Not anymore:

….Mr. Trump’s endorsement and the party’s reversal hours later came a day after Senator Mitch McConnell, the Republican leader, had stepped back from his earlier criticism of Mr. Moore, saying Alabama voters should “make the call” on whether to send Mr. Moore to the Senate. Taken together, the week’s developments suggested that Republicans were increasingly confident that Mr. Moore is well positioned to defeat Doug Jones, the Democratic nominee, in next week’s special election.

This is the most depraved conduct possible from the Republican Party. They could have stood by Moore from the start, saying that the charges against him weren’t credible. Alternatively, they could have publicly denounced Moore but continued to hope in their hearts that he won.

But no. They publicly accepted that the charges against Moore were credible. They agreed that this made him unfit for office. But then, when it looked like he might win, they turned around and decided to support him anyway. And this all came on the same day that Moore said this about Jewish philanthropist George Soros:

Woah. Roy Moore on George Soros: “No matter how much money he’s got, he’s still going to the same place that people who don’t recognize God and morality and accept his salvation are going. And that’s not a good place.” cc: @RJC @AriFleischer

Speaking about financial bubbles, John Maynard Keynes once said “the markets can stay irrational longer than you can stay solvent.” Right now, we seem to be stuck in a sort of Republican immorality bubble, and it’s already continued its surge for far longer than I would have imagined possible. But it won’t last forever. Someday the Republican Party is going to pay a price for its stunning lack of a moral compass.

¹Which, just for the record, goes far beyond molesting teenage girls.