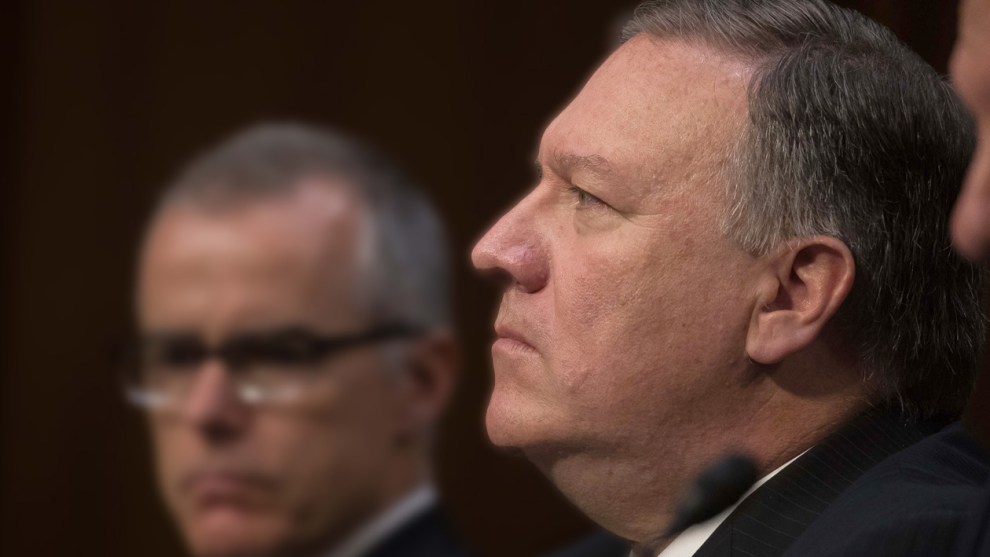 What’s the protocol for passing along a story that seems absurd on its face and is supported solely by anonymous sources? In the past, it probably would have been prudent to hold off. Sure, this is a blog, and the rules are a little looser, but it’s still not the National Enquirer.

But in the Trump era? Let’s just say that “absurd on its face” has a very different meaning these days than it used to. So feast your eyes on this report from the Intercept:

The Trump administration is considering a set of proposals developed by Blackwater founder Erik Prince and a retired CIA officer — with assistance from Oliver North, a key figure in the Iran-Contra scandal — to provide CIA Director Mike Pompeo and the White House with a global, private spy network that would circumvent official U.S. intelligence agencies….“Pompeo can’t trust the CIA bureaucracy, so we need to create this thing that reports just directly to him,” said a former senior U.S. intelligence official with firsthand knowledge of the proposals, in describing White House discussions. “It is a direct-action arm, totally off the books,” this person said.

….The proposals would utilize an army of spies with no official cover in several countries deemed “denied areas” for current American intelligence personnel, including North Korea and Iran. The White House has also considered creating a new global rendition unit meant to capture terrorist suspects around the world, as well as a propaganda campaign in the Middle East and Europe to combat Islamic extremism and Iran….According to two former senior intelligence officials, Pompeo has embraced the plan and has lobbied the White House to approve the contract.

Needless to say, everyone connected with this denies everything. And who knows? They might be telling the truth. Maybe this story is just a farrago of nonsense. On the other hand, BuzzFeed reported something last week that was more limited, but still eerily similar:

The White House and CIA have been considering a package of secret proposals to allow former US intelligence officers to run privatized covert actions, intelligence gathering, and propaganda missions, according to three sources who’ve been briefed on or have direct knowledge of the proposals.

One of the proposals would involve hiring a private company, Amyntor Group, for millions of dollars to set up a large intelligence network and run counterterrorist propaganda efforts….Another proposal presented to US officials would allow individuals affiliated with the company to help capture wanted terrorists on behalf of the United States. In keeping with that proposal, people close to the company are tracking two specific suspects in a Middle Eastern country, the sources said, for possible “rendition” to the United States.

….Those familiar with the proposals say one of the driving impulses for privatizing some missions is a fear by some supporters of President Donald Trump, outside government, that the CIA bureaucracy has an anti-Trump bias that would thwart efforts to fulfill the president’s objectives.

It’s not clear (to me, anyway) if something like this would be illegal. It probably depends on where the funding comes from and whether this group performs any explicitly prohibited actions.

That aside, it does not fill one with confidence to see the names Mike Pompeo, Oliver North, and Erik Prince mentioned in the same breath. This story may or may not go anywhere, but it’s worth keeping an eye on.