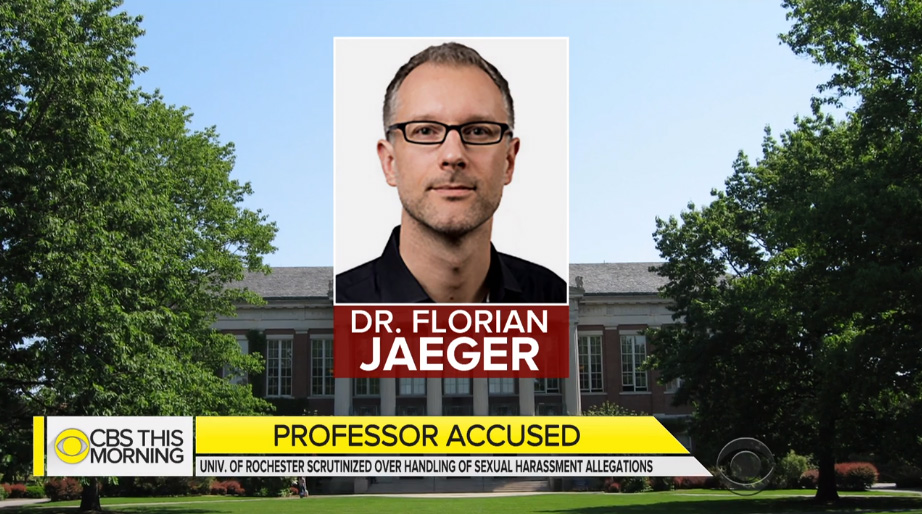 Last month Madison Pauly reported on Florian Jaeger, a professor in the Department of Brain and Cognitive Sciences at the University of Rochester:

Celeste Kidd was elated when she learned, in 2007, that she had been invited to interview for a Ph.D. program at the University of Rochester in New York….As she began the interview process, Kidd was told that in addition to Aslin, she would be encouraged to work closely with the department’s prized recent hire, professor T. Florian Jaeger, an expert in linguistics and computational methods. She met with Jaeger—but left the interview disturbed. Rather than asking about her research, she says, the professor invited her to a party that weekend, which she declined. Within days, he had sent her a message on Facebook. “you should have come to that other party,” he wrote.

“I wanted to come, and ordinarily I would have but what with my not being accepted into Rochester yet, I didn’t want to make myself look like I enjoyed myself too much too often, you know?” Kidd wrote back.

“you should not be worried about that type of stuff. at least no with me,” Jaeger replied. He added: “rochester used to be the place for legendary parties (with lots of nudity,etc. =)”

Things got much worse after that, leading to a series of formal complaints. Initially the university defended Jaeger and dismissed the complaints filed by Kidd, now an assistant professor at Rochester, and six other faculty members (plus one former grad student). But that was pre-Harvey Weinstein. Today the Washington Post reports that a second shoe has dropped in the Jaeger affair:

Hundreds of professors are urging their students not to apply to the University of Rochester, a private research university in western New York. The boycott comes after allegations that Florian Jaeger, a professor in the brain and cognitive science department, preyed on female students. Eight current and former Rochester researchers filed an Equal Employment Opportunity Commission complaint against the university in September for what they viewed as the administration’s failure to adequately protect its students.

….[It] is unprecedented for these discussions to occur openly. This the first time academics have issued this sort of public statement, said Heidi Lockwood, a Southern Connecticut State University professor of philosophy and co-author of the letter of concern.

….The university has commissioned another investigation, led by attorney Mary Jo White, a former chair of the Securities and Exchange Commission….White “has accepted the assignment on conditions of unconditional independence and unfettered access to all witnesses, documents, and information within the University’s control,” a representative for the University of Rochester wrote in an email to The Washington Post.

Stay tuned. In September, this might have gone nowhere. Today, it might finally get taken more seriously.