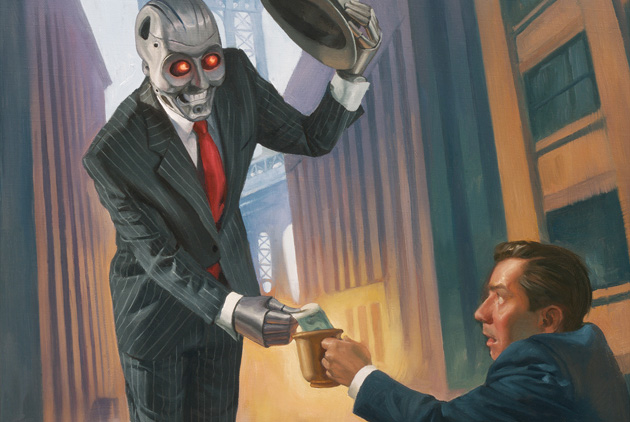 As you all know, I think that intelligent robots will eventually take over all human work. The standard take on this—which I repeat in my recent article—is that even if this produces mass unemployment in the medium term, it will be great in the long term. No more work! We can all live in comfort, pondering philosophy and engaging in uplifting conversation. We will paint and read and admire nature. We will explore the planets and send generation ships to distant stars. It will be a golden age for humanity.

Maybe, but it so happens that I don’t believe this. So just in case you’re not depressed enough by all things Trump, here are a few scenarios I actually consider more likely. Trigger warning: I’m not joking! I don’t have any special knowledge, of course, but I really believe that some of these things are pretty plausible. Conversely, I don’t believe the golden age stuff for a second. Without the pressure of needing to survive, the vast majority of humanity has very little ambition. We’re a lot more likely to watch dumb TV and play video games than we are to read Plato or study cures for cancer. In fact, it’s way worse than that.

Here are a few possibilities. Note that for the purposes of this thought experiment, I’m assuming that we succeed in building strong AI that’s better and smarter than the smartest human being. That may or may not happen, but those are the rules of the game:

There are loads of other possibilities, of course. You can play too! Note that I haven’t bothered including the truly apocalyptic scenarios where robots expand infinitely, impassively harvesting the entire earth for material to build more computing power. Nor the possibility that we’ll all dive into virtual realities and live out our lives forever as digital simulacrum maintained by the robots. I mean, come on. That stuff is pretty far out there, amirite?

¹If you insist on a bit of optimism, it’s also possible that robots will design brain implants that provide humans with, essentially, an instant education in everything. Humans still won’t be as smart as robots, but we won’t be illiterate. In fact, we’d be the most literate people ever in history.

²Why will we fight wars in an era of endless plenty? Beats me. But one thing humans will probably always be better at than robots is figuring out some reason to fight wars. Religion will do nicely. Or blind nationalism. Or just good old personal feuds. And keep in mind that even if basic resources are endless, there are still things like original Rembrandts and houses on the coast that will still be scarce. I don’t think we’ll have any problem continuing to figure out things to fight about.

³But what about robot intelligence? Won’t it stick around? Sure, but who know what they’ll do with no biologicals around to give them orders. Maybe they just keep milling around until their sun goes nova. Maybe they all switch off. Beats me. But I consider the infinite expansion hypothesis unlikely. Why? Because it hasn’t happened yet. Unless we’re the very first intelligence ever in the galaxy, digital intelligence that expanded forever looking for raw material would have eaten up the Milky Way long ago.