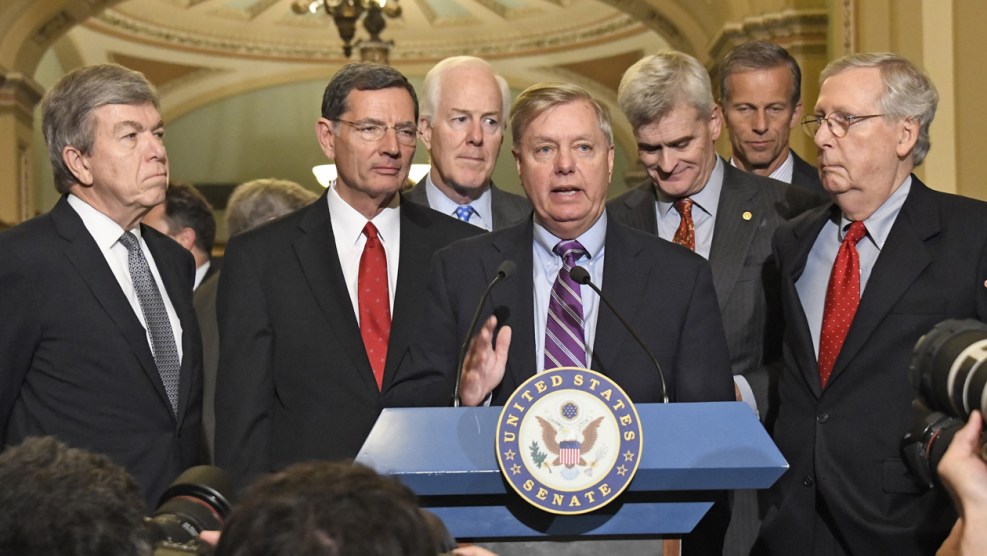 It’s hard to know how to react to the cynicism of the Graham-Cassidy health care bill. For starters, it’s as bad as all the other Republican repeal bills. Tens of millions of the working poor will lose insurance. Pre-existing conditions aren’t protected. Medicaid funding is slashed. Subsidies are slashed.

But apparently that’s not enough. Republican senators (and President Trump, of course) obviously don’t care what’s in the bill. Hell, they’re all but gleeful in their ignorance. Nor is merely repealing Obamacare enough. Graham-Cassidy is very carefully formulated to punish blue states especially harshly. And if even that’s not enough, after 2020 it gives the president the power to arbitrarily punish them even more if he feels like it. I guess this makes it particularly appealing to conservatives. Finally, by handing everything over to the states with virtually no guidance, it would create chaos in the health insurance market. The insurance industry, which was practically the only major player to stay neutral on previous bills (doctors, nurses, hospitals, and everyone else opposed them) has finally had enough. Even if it hurts them with Republicans, Graham-Cassidy is a bridge too far:

The two major trade groups for insurers, the Blue Cross Blue Shield Association and America’s Health Insurance Plans, announced their opposition on Wednesday to the Graham-Cassidy bill….“The bill contains provisions that would allow states to waive key consumer protections, as well as undermine safeguards for those with pre-existing medical conditions,’’ said Scott P. Serota, the president and chief executive of the Blue Cross Blue Shield Association.

….America’s Health Insurance Plans was even more pointed. The legislation could hurt patients by “further destabilizing the individual market” and could potentially allow “government-controlled single payer health care to grow,” said Marilyn B. Tavenner, the president and chief executive of the association. Without controls, some states could simply eliminate private insurance, she warned.

Literally nobody in the health insurance industry likes this bill. The chaos and misery it would unleash are practically undebatable. It’s being passed for no reason except that Republicans have screwed up health care so epically that they have only a few days left to pass something, and Graham-Cassidy is something.

If there’s any silver lining at all to this mess, it comes from AHIP’s Marilyn Taverner: the bill is so horrifically bad that it might allow “government-controlled single payer health care to grow.” That’s probably true. No matter how enamored they are of Donald Trump, the American public can be suckered only just so long. If you make things bad enough, eventually they’ll start to wonder why America is the only advanced country on the planet where health care sucks so badly. Maybe all those countries with single-payer health systems have a good idea after all?

If that happens, I’ll be a happy camper. But I sure wish we didn’t have to do it on the backs of the poor and the sick.